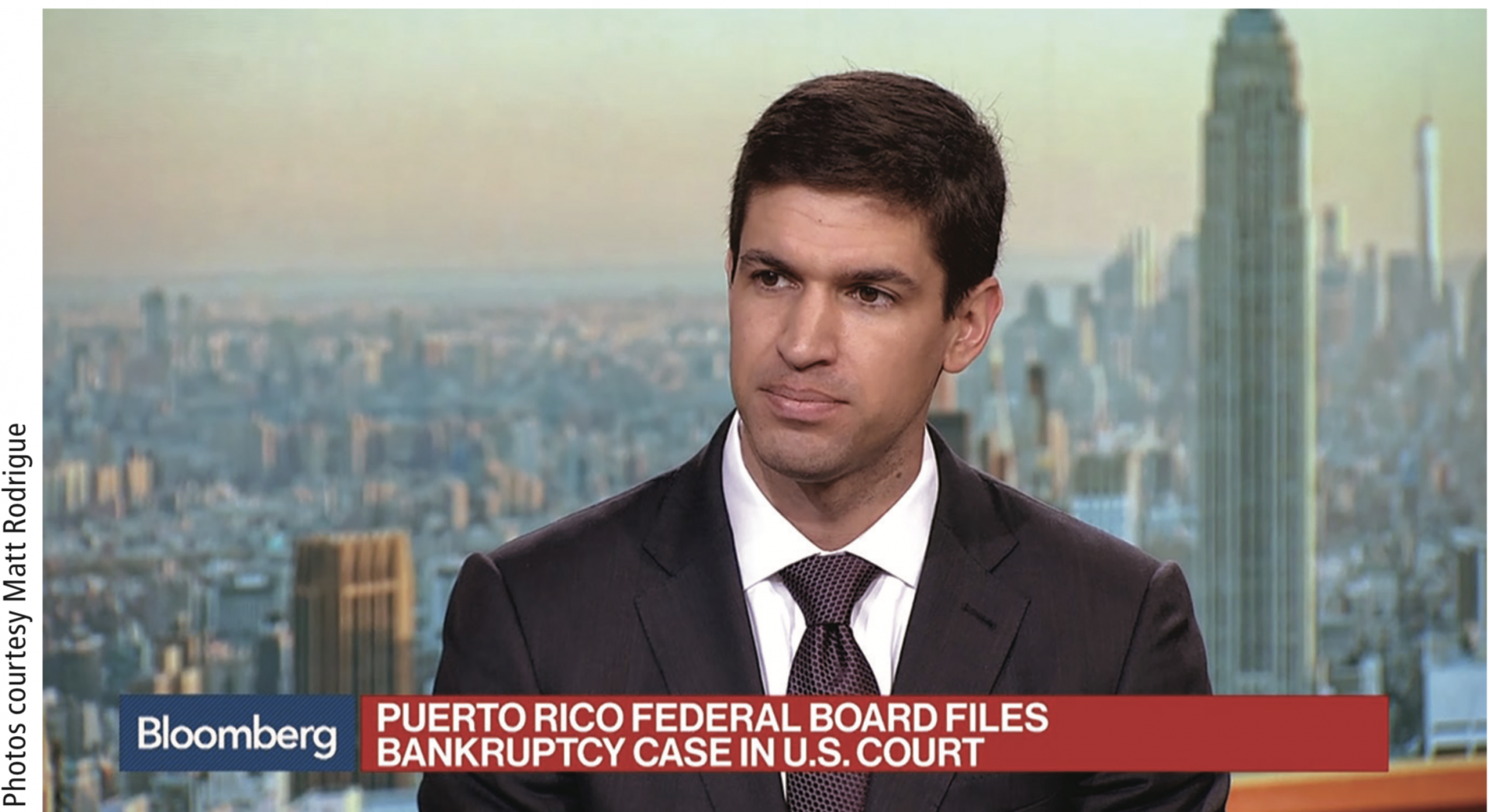 WHEN HE FIRST ARRIVED in Orono in 2000 to start his college career, Matt Rodrigue ’04 understandably had no idea that in less than 15 years he would become a leading figure in resolving one of the United States’ biggest public financial crises.

But that’s exactly what happened, as the Farmington native became a prominent name and face in media coverage of Puerto Rico’s financial collapse. As managing director of Miller Buckfire, an inter- national investment banking firm based in New York City, Rodrigue was hired by creditors to help negotiate the gargantuan task of restructuring the U.S. territory of Puerto Rico’s $123 billion public debt to its creditors and pensioners. Within four years, Rodrigue was receiving high accolades from clients and observers for an achievement that many thought was a mission impossible.

A star athlete and valedictorian of his high school class, Rodrigue was an archetypical over-achiever who entered college with a healthy collection of Advanced Placement credits and as a member of UMaine’s varsity cross country team. He left UMaine after four years in which he earned two bachelor’s degrees (computer engineering and electrical engineering) while minoring in mathematics and business administration. During that time he also served as Student Government president and as a member of the University of Maine System Board of Trustees, appointed by then-Governor Angus King to represent the students of Maine’s seven public universities.

Following his graduation, Rodrigue spent a couple of years in the workforce with Woodard & Curran, an engineering firm with deep ties to UMaine and a long history of hiring its graduates. It was there that he met and married his wife, Carissa. In 2006 they both left Woodard & Curran. He enrolled at Harvard University to pursue a master’s degree in business administration and she enrolled in Boston University School of Law.

Rodrigue acknowledges that many people influenced and motivated him as he pursued his education, notably his wife and parents, college professors, track and cross country coaches, and the many university leaders with whom he associated. However, he said his core values were profoundly shaped by his experience as a member and with an eventual leadership role within his UMaine fraternity, Sigma Phi Epsilon. Rodrigue and others on campus took on a tough assignment: re-establishing the UMaine chapter of Sigma Phi Epsilon after rules violations years earlier had forced its closure. Rodrigue and his fellow students used as their foundation the fraternity’s widely regarded “Balanced Man Program”: a blend of academic performance, leadership, and integrity standards to which all members and chapters are expected to adhere. Fifteen years after graduating, this philosophy continues to be his driving force as he shotguns to the top of his profession.

“Joining Sig Ep was the best decision I made in college,” he said, using the common shorthand for the organization. “It was my first time really leading a group, and I made many mistakes and got a lot of real-time feedback. That experience proved invaluable. We also wanted an alcohol-free and hazing-free fraternity experience, which was a radical idea at the time.” He continued his involvement in the organization after graduation, accepting a position on the fraternity’s national board of directors. This not only provided Rodrigue with opportunities to travel, but also to hone his leadership skills.

After graduating from Harvard, Rodrigue joined Miller Buckfire, a Manhattan-based investment bank focused on providing strategic and financial advisory services. Within three years, he was promoted to vice president, then to director, and finally to managing director, a position he holds today.
In 2015 Rodrigue and his firm took on an assignment for which Rodrigue would earn great success and widespread praise in the investment banking world. A year earlier, Puerto Rico’s economy collapsed under the weight of enormous government debt. The island territory of approximately 3,000,000 residents owed a staggering $123 billion to its creditors, primarily pensioners and investors in government-backed bonds (the financing method by which governments borrow money to fund certain operations, offer- ing tax-free interest payments to bond investors in return). 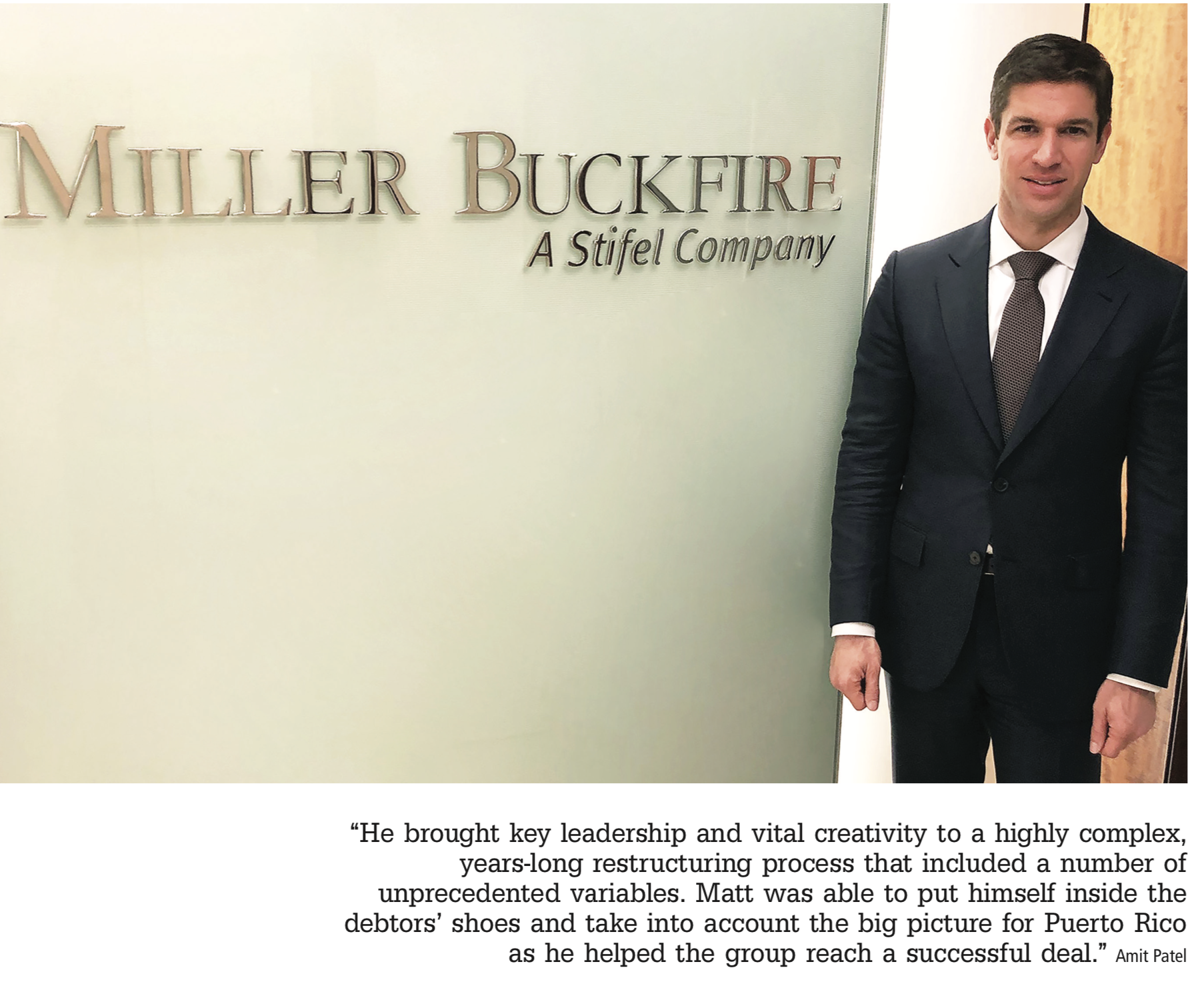 By comparison, the city of Detroit, Michigan, owed a record-high $18.5 billion when it declared for bankruptcy protection in 2013. Unlike counties and municipal governments, U.S. states are legally prohibited from declaring bankruptcy. [Territories were prohibited from filing for bankruptcy until 2016 when the Puerto Rico Oversight, Management, and Economic Stability Act was passed by Congress.]

In response to Puerto Rico’s poor economy and the territorial government’s over-dependence on borrowing money to fund public programs and services, three major credit-rating agencies downgraded Puerto Rico’s government bonds to “junk” level. The junk rating sent a message to investors that they were at high risk of not getting paid what was owed to them.

In response to the downgrades and other developments, a group of investors in Puerto Rico’s government-backed bonds hired Rodrigue and Miller Buckfire to help recover as much of what the investors were owed as possible.

“We were originally hired in July 2015 to advise four investment funds holding approximately $800 million of Puerto Rico’s debt,” Rodrigue recently recalled. “By the end of the process in 2019, we had a total of eight clients hold- ing more than $5 billion.”

For nearly four years Rodrigue was focused on finding ways to recoup what was owed to his clients while seeking a resolution that would allow Puerto Rico’s people and economy to recover from the territory’s financial crisis, one made much worse in 2017 by Hurricane Maria, which devastated the island in ways that remain far from resolved.

For Rodrigue the assignment proved at times to be all-consuming: conferences, trips to Puerto Rico, countless weekends and holidays, and always preparing for the next meeting.

“Fortunately, my wife, who is an attorney, is exceptionally understanding, and our firm has a strong team that was able to cover for me during the times I had personal conflicts,” he said.

Rodrigue’s focus, diligence, and negotiating abilities eventually paid off. In February of 2019, a federal judge approved a major step in the financial crisis: the resolution of $17.6 billion owed to Rodrigue’s clients and other investors that had been originally guaranteed by payments from Puerto Rico’s sales tax revenue. The so-called COFINA debt-adjustment plan, negotiated by Rodrigue and colleagues, returned 93 cents on the dollar to senior bondholders and 55 cents on the dollar to junior investors, according to news reports at the time. Both amounts were far greater than what most investors and observers anticipated recovering.

Worth noting, the resolution reduced Puerto Rico’s COFINA debt by 34 percent and allowed it to retain about half of its sales tax revenues to help fund other obligations. The settlement also spurred significant investor demand for COFINA bonds.

“This really sets the stage for the Commonwealth to recover from bankruptcy,” he said. “It also sets Puerto Rico up to re-access capital markets.”

Susheel Kirpalani, lead attorney for an ad hoc group of bondholders, said Rodrigue proved to be capable and dependable, immune to shortcuts, and dedicated to researching an issue from all angles so that clients would understand the restructuring proposals on the table would benefit all sides involved.

“I don’t think we could’ve achieved the restructuring without Matt,” Kirpalani said. “He’s all about substance, and he never shies away from a challenge.”

Rodrigue’s accomplishment in Puerto Rico earned him major accolades in his profession. In October The Bond Buyer, a daily trade publication that serves the many stakeholders of the municipal bond market, named Rodrigue one of its 2019 “Rising Stars.”

“He brought key leadership and vital creativity to a highly complex, years-long restructuring process that included a number of unprecedented variables,” the publication quoted Amit Patel, managing partner at Invictus Global Management in response to Rodrigue’s work in Puerto Rico. “Matt was able to put himself inside the debtors’ shoes and take into account the big picture for Puerto Rico as he helped the group reach a successful deal.” 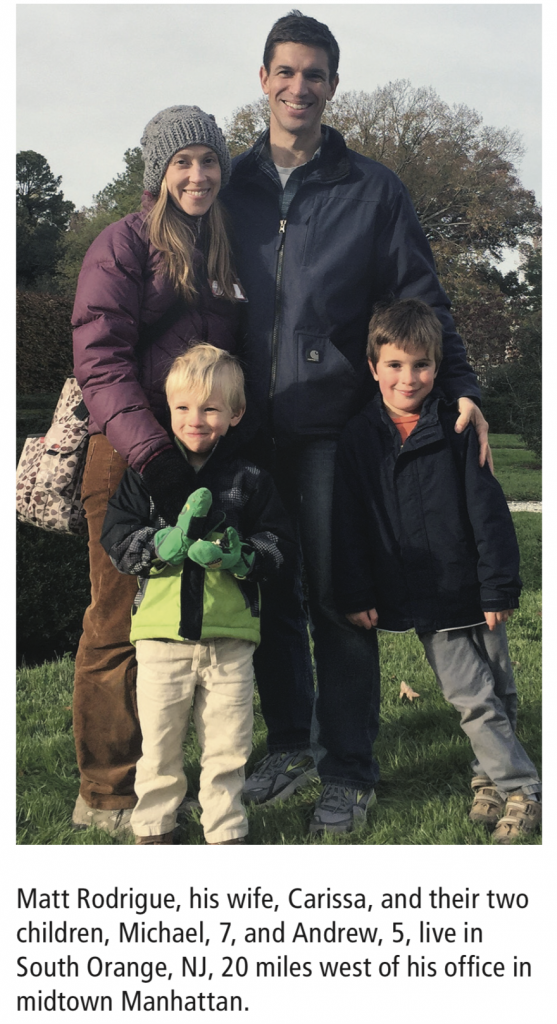 More accolades followed in December. The M&A Advisor, an industry organization focused on mergers and acquisitions, restructuring, and refinancing, announced that Miller Buckfire will receive its 2020 “Restructuring Deal of the Year” award.

Rodrigue, his wife, Carissa, and their two children, Michael, 7, and Andrew, 5, live in South Orange, NJ, 20 miles west of his office in midtown Manhattan. While he’s far more worldly and better traveled than the young man who first set out for Orono all those years ago, Rodrigue maintains and nourishes deep roots in his home state. His parents still live in the house where he was raised. His sisters are in Maine. He owns rental properties in the state. Rodrigue continues his long relationship with the Maine chapter of Sigma Phi Epsilon, and he currently serves on the university’s Board of Visitors, the senior advisory group to UMaine’s president.

“He is passionate, and he is devoted and dedicated, and what drives those qualities is an amazing intellect, a love for Maine, a remarkably supportive family, and the love he finds with his wife and children,” said Robert Dana ’80, UMaine’s vice president for student life.

Dana, who first met Rodrigue shortly after his arrival on campus and has maintained a strong relationship with him, continues to be impressed with his former student’s Greek values.

“I was, and continue to be, humbled by Matt’s humanity and by his humility,” Dana said.