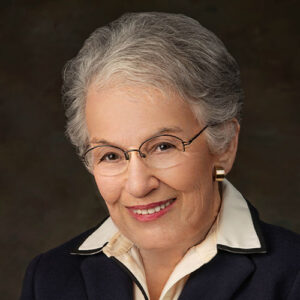 Although she is not a UMaine alumna, Renee Minsky is a longtime donor to the University of Maine and supporter of the arts on campus. She is a true Champion of UMaine. Minsky was one of the first Hudson museum volunteer docents. Over the years she has served on the Hudson Museum Advisory Board and held leadership roles for both the Hudson Museum and the Collins Center for the Arts. She was also one of the earliest members of the UMaine Patrons of the Arts, a community-based group that raised funds to support the expansion of arts programs for students at UMaine. She is a Patron of the Arts, a member of the Stillwater Society at the highest level and a member of the Charles F. Allen Society. She is also a Host Committee member for the Maine Jewish Hall of Fame.

Minsky and her husband, Leonard, have offered valuable support through the Renee Minsky Fund, which benefits the Hudson Museum. The Minsky field trip fund helps elementary and secondary school groups access programs and guided tours at the Hudson Museum. Most strikingly, their generosity has resulted in the Leonard and Renee Minsky Music Recital Hall in Class of 1944 Hall. Attend any concert in the recital hall, and you may find Renee in the audience. Minsky was awarded honorary degrees from UMaine in both 1944 and 1950.

“Renee has the best interest of UMaine leaders, faculty and staff at heart,” wrote president Susan J. Hunter. “She listens thoughtfully to issues facing our institution, and offers wise, graceful insight with no strings attached.”

Her generosity extends beyond the UMaine campus as well. She is a United Way of Eastern Maine benefactor. Along with her husband, she donated $1 million to EMMC for the addition of single occupancy patient rooms. Quiet and humble are words most often used to describe her, but Minsky’s contributions to the arts of UMaine have been anything but.

2020 Champion of UMaine Award Sponsored by: