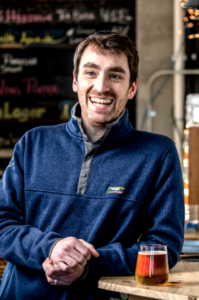 Nate Wildes is a champion for the state of Maine, though he likely didn’t always see himself that way.

As a UMaine student with varied interests, he majored in political science and minored in innovation engineering. Outside of classes, he participated in student government and worked in communications at the Advanced Structures and Composites Center. During his junior year he became a Congressional intern in the Washington, D.C., offices of U.S. Senator Olympia Snowe ’69.

A year before he graduated, Wildes was recruited for a job in Cincinnati. He spent over three years in that city, working on challenging projects, meeting with innovators and leaders, and traveling internationally.

Despite his success and the excitement of his position, Wildes was less pleased with the quality of life in his new location. He and his partner, now his wife, Jamie Pacheco ’12, knew that Ohio was a temporary residence, and that they wanted to return to Maine.

Since moving back to the Pine Tree state, Wildes has used his political and innovation engineering expertise in various capacities. He co-founded Flight Deck Brewing Company in Brunswick, consulted, and embarked on other business ventures. He also spent nearly four years as director of engagement for Live + Work in Maine, an initiative that works with both employers and prospective employees who have set their sights on employment in Maine. Wildes became executive director of the company in January.