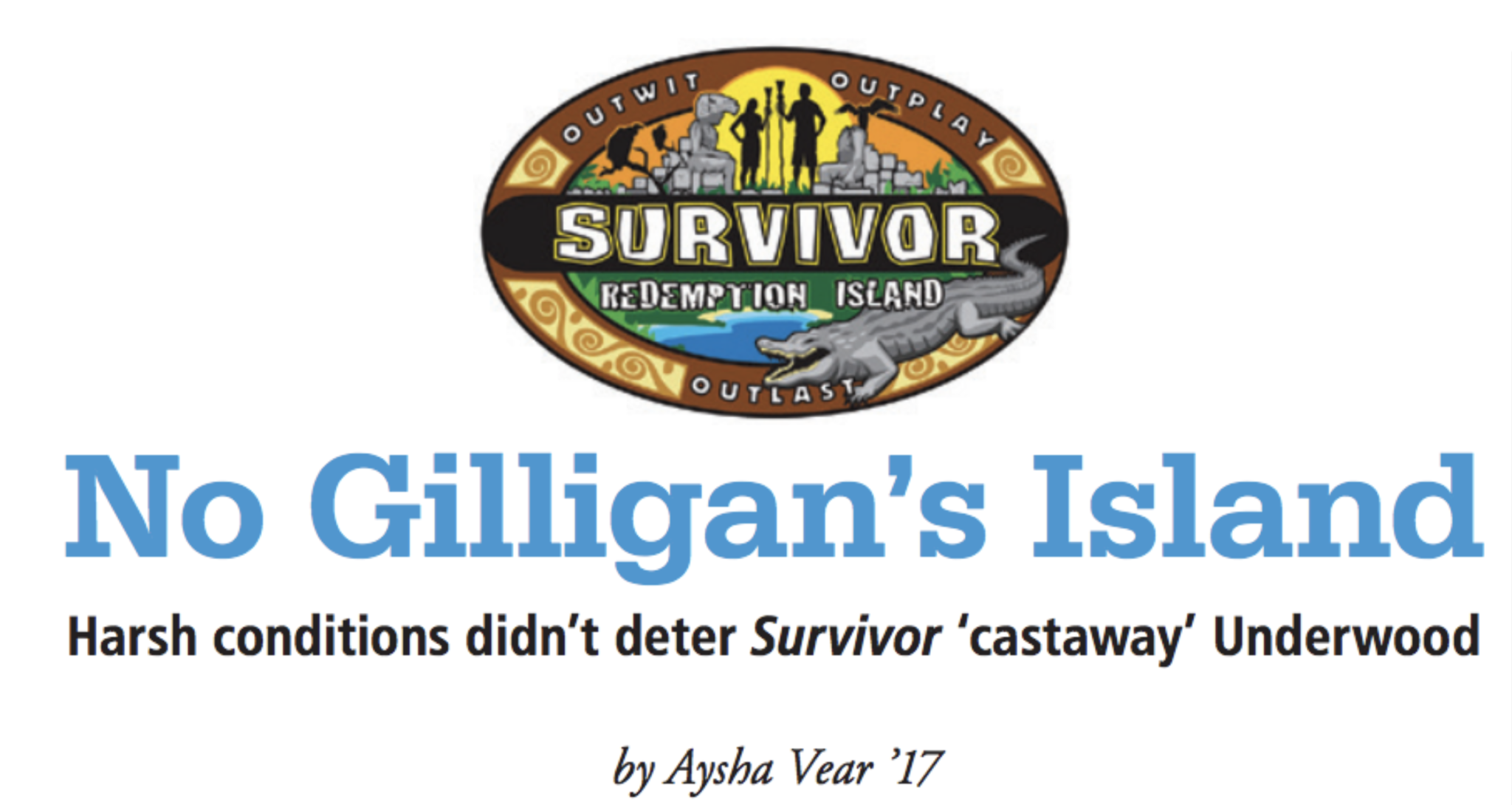 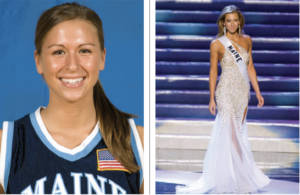 Four years later, Underwood began to pack living rooms across the country, as millions of viewers gathered to watch her and 17 others compete on Survivor, CBS’s hit reality television show. To the faithful followers of the program, the Benton, Maine, native was simply “Ashley,” a fan favorite and remarkably savvy competitor. Her national following was far greater than anything she could have imagined when, in the fall of 2003, she moved into Hancock Hall as a first-year student planning to major in nursing.

For those not familiar, Survivor features a collection of strangers who are placed in a remote location as “castaways” and grouped as competing “tribes.” Working together and individually, the show’s participants perform physically and mentally demanding challenges set up by the show’s producers. The competitors do this while under the watchful lenses of a TV crew recording nearly every move they make, including scrounging for food, water, shelter, and fire to sustain themselves. Over time, the rules of the competition whittle down the number of participants until only one remains: the “sole survivor,” who walks away with a $1 million prize.

During the show’s twenty-second season, Survivor: Redemption Island, Underwood “survived” deep into the competition, which was recorded in Nicaragua during the summer of 2010. Eventually Underwood became one of four remaining finalists but was “voted out” in the next-to-last episode of the season. Still, it was a life-changing experience, one witnessed by more than 10 million people weekly for a 15-week period in 2011.

A High Profile
Ashley Underwood’s celebrity status started early as a standout athlete at Cony High School in Augusta, followed by her UMaine basketball heroics from 2003-2007. Her public profile continued to rise when she entered and won the Miss Maine USA competition in 2009.

While competing in the national Miss USA contest she became close friends with Stephanie Murray Smith, 2009’s Miss South Carolina. Following the pageant the pair auditioned in Los Angeles for another CBS reality TV show, The Amazing Race. Underwood was selected as an alternate for the show, but a year later CBS reached out and offered her a spot on a different show: Survivor.

Underwood said she jumped at the opportunity. With just two months to prepare, she hit the gym, working out tirelessly to ensure she was in the best physical shape possible. She also carefully studied previous seasons of the show to better understand strategies for the game.

Only after the show’s producers publicly announced her selection as a “castaway” for Season 22 could Underwood finally share details with her family and friends. Later her brother hosted weekly viewing parties at his house as the season aired so that everyone could ask questions as they watched her experience unfold.

“I knew it would be difficult to completely prepare for things like mental, emotional, and physical exhaustion, dehydration, starvation, and more,” Underwood explained, “but I did my best.”

In August 2010 Underwood traveled to Nicaragua to start filming. Her 38 days there were, as she describes, “the ultimate test of [her] will and determination.” She attributes a lot of her motivation to her then-boyfriend Chris Markwood ’05, her family, and her former coaches and teammates who were so supportive and encouraging.

Surprisingly, it was her pageant experience that she drew on during the Survivor competition.

“It’s similar [to the pageant] because you are competing as an individual, which was always a challenge for me since basketball is very much a team sport,” she explained. Both the pageant and Survivor forced her to play a strategic game, requiring a lot of mental stamina and self-confidence to endure. That said, Underwood believes she could not have made it through the experience without pulling from certain moments and memories throughout her academic and athletic college experiences. 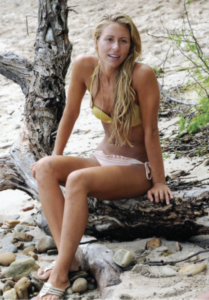 Contestants on Survivor have to work hard to find whatever food and water they consume, resulting in psychological and physical exhaustion. Already slender at the start of the competition, Underwood lost twenty pounds during her time on the island. Coupled with the required physical demands and the mentally taxing social game, she described the stress of the competition as unlike anything else in her life.

“Being in that state, surrounded by people you don’t know and cannot trust, is probably the worst feeling in the world,” she shared. Underwood focused on strategizing and making temporary alliances with certain co-competitors and that approach, she acknowledged, fostered feelings of loneliness and vulnerability from the very start.

But that didn’t stop Underwood from creating lasting friendships— even with fellow “castaway” Natalie Tenerelli, who, when the competitors narrowed to four, betrayed her alliance with Underwood and helped others vote Ashley off. Still, she and Tenerelli continue to keep in touch. Francesca Hogi, another fellow contestant, also remains a friend. In fact, the pair climbed Tanzania’s 19,341-foot Mount Kilimanjaro together and have visited each other many times since completing filming.

Following her elimination as a Survivor contestant, Underwood was flown home and hospitalized due to a parasite she had contracted. Complicating matters, her confidentiality agreement kept her from sharing any information about the show until it aired months later on May 15, 2011. Immediately following the season finale, Underwood and the other “castaways” appeared on a nationally broadcast live TV special in New York City. Shortly thereafter she moved to Manhattan, where she often appeared as a celebrity guest at events.

Life Today
Today the reality TV celebrity is known as Ashley Underwood Markwood, having married in 2014. Her husband, Chris Markwood, a former UMaine men’s basketball player and assistant coach, is now on the coaching staff at Northeastern University. The Markwoods and their two-year-old daughter London live in suburban Boston, where Ashley is a stay-at-home mom. She also writes “Style Grace and Lace,” her lifestyle and motherhood blog, and contributes to the website and blog, “Mommy Nearest.”

“Blogging seemed like a great way to incorporate my affinity for fashion, style, travel, and a way to share my motherhood experiences,” she says.

Underwood generally doesn’t volunteer to people that she was a Survivor contestant. However, she said most people express surprise when they do find out, usually through social media.

Knowing then what she knows now, from the exhaustion, to the loneliness, to the physical toll it took on her body, she says she would still compete on the show.

“It was an extremely positive chapter in my life that I am very proud of and one that brought a lot of joy and adventure to my family and friends as well.”