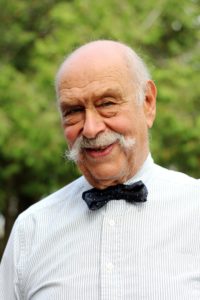 Although not a University of Maine graduate, Norman Minsky‘s advocacy, loyalty, and generosity to UMaine rival that of the most dedicated alumni. His support for UMaine’s academic quality and diversity has helped advance the university’s mission as a catalyst for Maine’s educational, cultural, and economic needs and potential.

Born in Bangor, Norman earned his bachelor’s and law degrees from Boston University. In the six decades that followed, he became an influential member and leader of several civic, community, and professional boards and organizations. He also held public offices, representing the residents of Bangor for four years in the Maine House of Representatives and, later, serving six years on the Bangor City Council, including one term as Mayor.

Norman’s selection as the inaugural recipient of the Champion of UMaine Award reflects the extensive support he has provided to the university as a valued volunteer, advisor, and benefactor. He led the university’s previous capital campaign in greater Bangor for several years and has served as a member of the advisory board of the Maine Center for the Arts (now known as the Collins Center for the Arts). He currently serves on the University of Maine Foundation’s board of directors.

Together with his brother Leonard’s family, Norman provided funds to establish the Minsky Jewish Heritage Video Collection, which is housed in Special Collections of UMaine’s Fogler Library. In 2009 his generous donation enabled the university’s programs in Religious Studies and Judaic Studies to expand into academic minors, and also provided funds for a speaker and film series.

In 2010, in recognition of his multiple contributions to UMaine, the Alumni Association named Norman an honorary alumnus. The University of Maine Foundation has also recognized Norman for his philanthropic support of UMaine: in 2015 it selected him as a recipient of its Stillwater Presidential award.