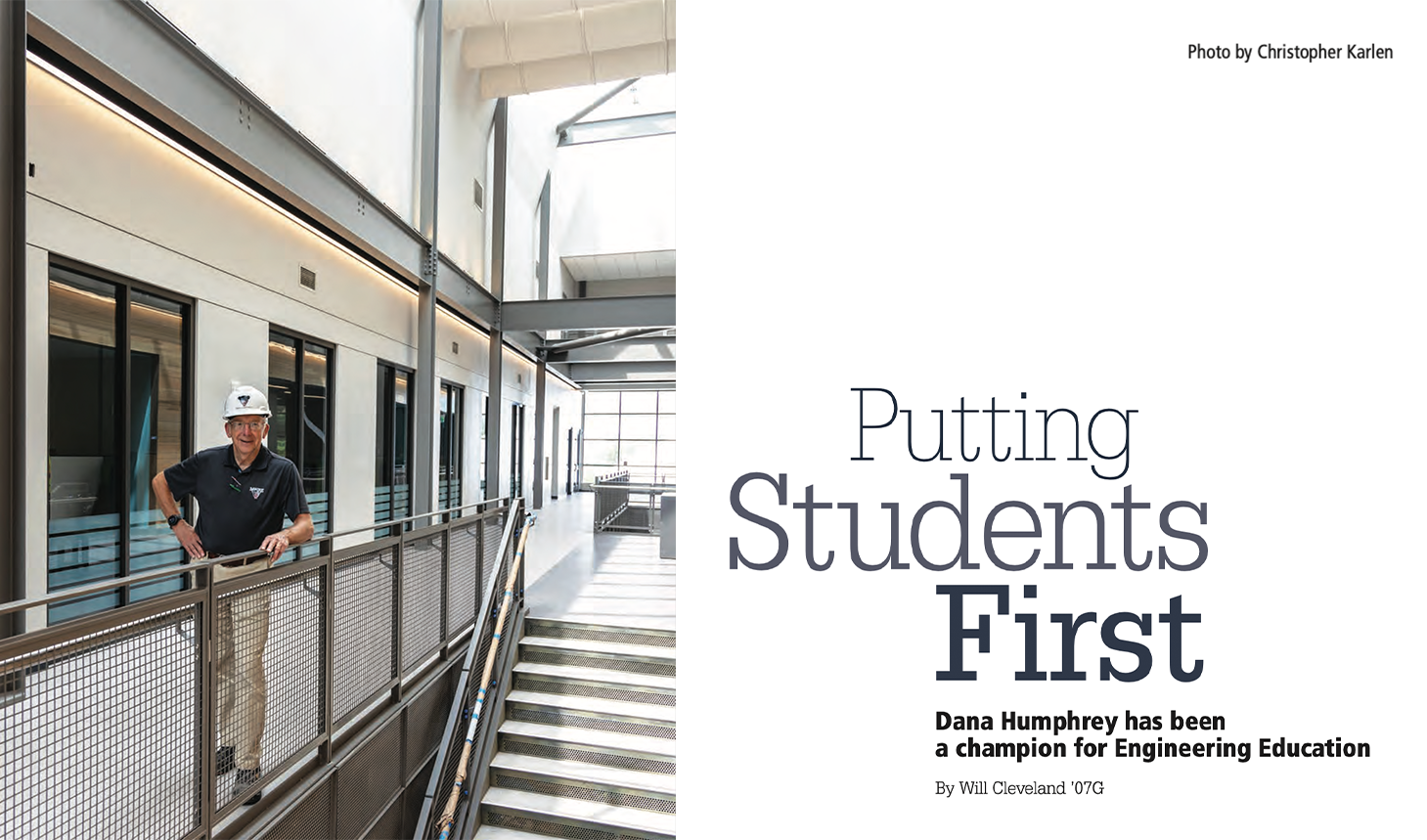 EVER SINCE THE age of 10, there was little doubt what Dana Humphrey would do with his life.Fueled by a fascination with construction, Humphrey called himself the “sidewalk superintendent” as he monitored the expansion of a public works garage project in his hometown of Marblehead, Massachusetts. “During the summertime, I was there all day long, except that my mother made me come home for lunch,” Humphrey joked. During his senior year of high school, he earned his Eagle Scout and then through a local Boy Scout program, he was paired up with a civil engineer for a career-shadowing opportunity.

With that same discerning eye of a civil engineer, attention to detail, and kind-hearted approach, Humphrey is about to wrap up a 36-year career at the University of Maine College of Engineering, the last 16 of which he spent as dean. Humphrey is a geotechnical engineer, concerned with “soil and rock as a building material.”

“I do the same thing as I did when I was five years old, I play in the dirt,” Humphrey offered. “But now I get paid way better.”

The sidewalk superintendent is now overseeing the construction of the transformative E. James and Eileen P. Ferland Engineering Education and Design Center, a 108,000-square-foot state-of-the-art facility devoted to the students he has spent decades mentoring. Humphrey, the second longest serving engineering dean in UMaine history, always put students first. So it’s fitting that he will be retiring right as the Ferland Center is completed and open for students.

“People say things like, ‘He changed the course of my career and life.’ All of those things sound so nice, but the truth is that he touched so many students’ lives,” said engineering alumnus Chris Helstrom `01, `05G. “He had the same impact on every student he ever interacted with. I think you could call a hundred of them right now and everyone would be like, ‘Yeah, that dude changed my life.’ He had that ability to connect, guide, and mentor students. He still is the best boss I’ve ever had.”

Talk to his colleagues, students, and friends and you’re met, nearly universally, with messages of support and encouragement. Dr. Masoud Rais-Rohani, the Richard C. Hill Professor and chair of the Department of Mechanical Engineering, called Humphrey “a champion for engineering education.”

He has a very strong passion for the engineering profession. That really is quite noticeable for everyone who interacts with him, it doesn’t matter if it is for five minutes or several hours. You come away with how much he has devoted, all of his energy in promoting engineering education at UMaine. And he has done a great service, not only to the University of Maine, but to the state of Maine by emphasizing the importance of engineering and emphasizing what engineers in different disciplines can do for economic development in the state.”

Rais-Rohani said the Ferland complex s the “signature project on campus.” Humphrey has been working on the project for the last nine and a half years. It’s the first new engineering education building at UMaine since 1971.

“It is very fulfilling for him, and for those around him, to see that proj- ect come to completion at the time he retires. It’s very appropriate that he has the opportunity to see the fruits of his labor.” 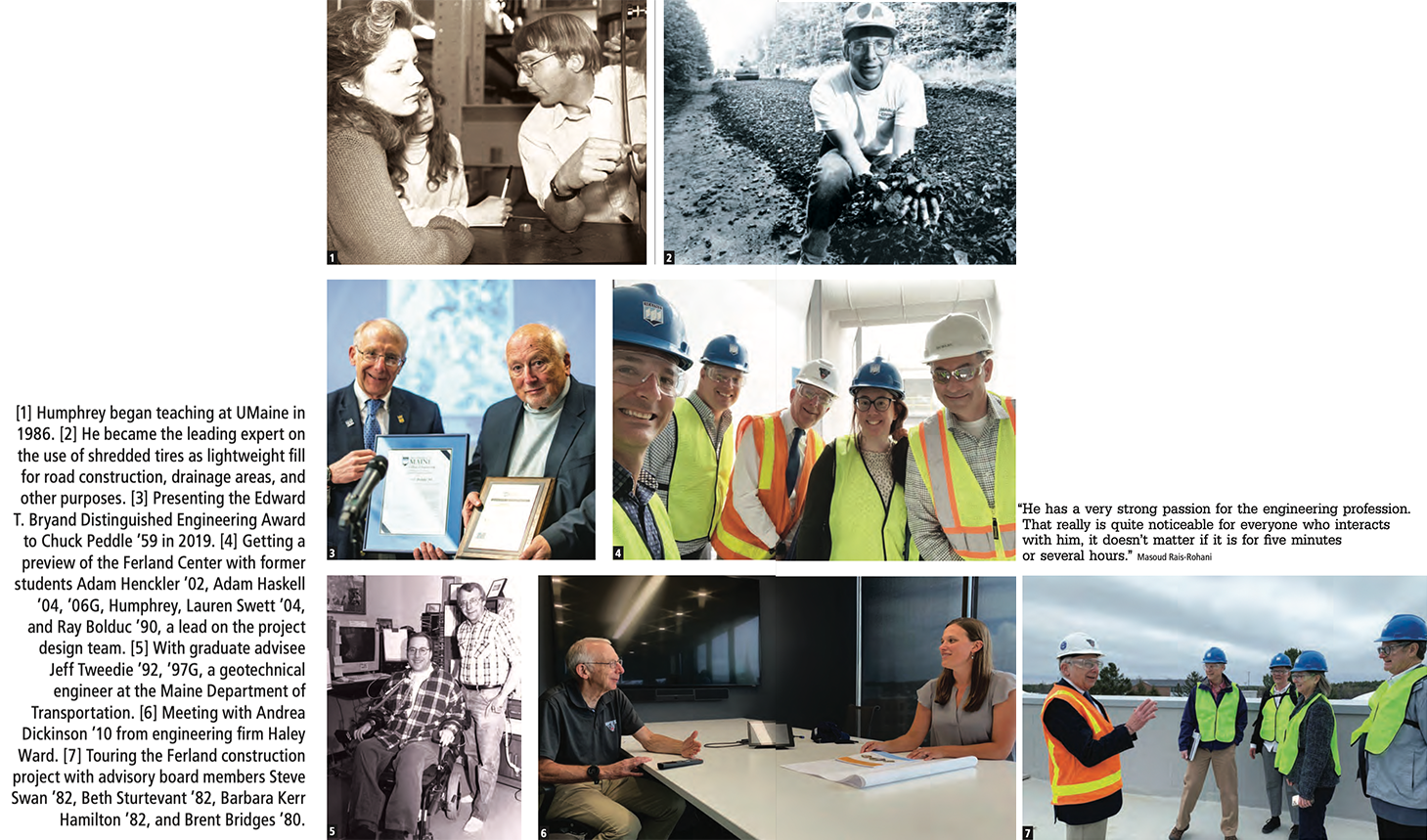 Humphrey completed his bachelor’s degree at the University of New Hampshire before earning a master’s degree in civil engineering (with a specialization in geotechnical engineering) at Purdue University in Indiana. Fresh off completing his doctorate, Humphrey was led to UMaine by one simple factor: students.

“I interviewed at four universities and when I came to UMaine, they sat me down with a group of students and they were part of the interview team,” Humphrey said. “They cared so much about how I was going to be as a teacher. It was clear to me they had a great work ethic and that really resonated with me.”

He was also drawn to Orono by the emphasis placed “on a quality balance between teaching and research. And that’s my value system.”

Offered the job, Humphrey put Purdue in the rearview mirror and headed to Maine.

“I left a full box of my bound dissertations on my major professor’s desk late on a Friday night with instructions about who needed to get copies. Then I got in my car, drove for two days, and got [to Orono] here the night before Labor Day [in 1986]. On Labor Day, I went into the office, not that I had one yet. I had no key to the building, no office, but John Alexander, the department chair, was in his office working.

“So I screamed through the open window, ‘John, let me in.’”

And Alexander let him in the door and Humphrey never left. Humphrey said Alexander, the administrator who had hired him, was one of his mentors.

Like a good engineer, Humphrey said he had his career plan outlined before he joined the workforce.

However, Humphrey’s marriage to Barbara, a retired laboratory technologist, is among the few things in his life that didn’t follow a plan. He went off-script after seeing a newspaper personal advertisement from “an outdoorsy woman.”

Being outdoorsy himself, he answered the ad. The couple has now been married 34 years. They live in Palmyra, a small town about a 40-minute drive west of Orono and not too far from Humphrey’s beloved Appalachian Trail, on which he has spent countless days.

Like many university engineering professors, Humphrey enjoys advising public and private sector entities on how best to solve their problems and challenges. “I’m not a little laboratory experiment guy,” he said. “I’m a very practical engineer, very hands on.” Humphrey was especially fond of the summer field season, when he was able to get off campus and work with graduate students on various projects. For one of his most well-known and innovative projects, they used pieces of cut up, used tires (also known as tire-derived aggregate) as lightweight fill in roadways, retaining wall backfill, and thermal insulation. That technique is now commonly considered as a civil engineering option.

fell in love with engineering, specifically computer engineering, but she found many of the schools she was considering in the Northeast didn’t have the right program to fit her needs. She quickly knew UMaine was the place for her. Convincing her parents, however, was a little more difficult.

That’s where Humphrey entered. On his day off during the Columbus Day long weekend, Humphrey came to campus and gave the DeFilippos a personalized tour. Humphrey’s personable and sunny outlook stood out immediately.

“He shook our hands and said, ‘Hi, I’m Dana,’ not Dean Humphrey,” said DeFilippo, who will remain at UMaine to complete her master’s degree. “He was real friendly, like I had known him for years. He went out of his way, went that extra mile, to help make sure I could get here. And when I was here, he regularly checked in on me.”

“Dana has been instrumental in a lot of students’ lives,” said Bill Nickels, who completed his undergraduate degree in civil engineering at UMaine in 1993 and then earned a master’s degree in the same discipline two years later. “I think many would say the same thing, if it wasn’t for Dana’s efforts when we were in the classroom, a group of us wouldn’t have made it to where we are as easily, if at all. That just goes to show his dedication to students and the university, making it a better place and to make sure you’re successful at what you do.”

Nickels noted that Humphrey traveled to Oregon, where Nickels runs and operates Foundation Engineering, Inc., to join him for his 50th birthday party. Referring to Humphrey as his mentor, he recalls telling him, “’You know, Dana, I wouldn’t be in this position without you.’ He was the dedicated and influential guy I had throughout my academic career. He was there. His door was always open.”

Chris Helstrom’s story echoes so many UMaine engineering students. “To be honest, I get choked up a little thinking about [Humphrey’s influence],” Helstrom ’01, ’05G said. “He was endlessly patient, he always put the students first, and honestly, he treated me like a son and I thought of him as a father. We had a really strong relationship.”

“The whole philosophy of preparedness and just really having a solid game plan for field work, Dana really instilled that in me. He’s the best in the business. I’ve never met anyone like him.”

Whether guiding students at a field site or advising policy makers at Maine’s State House, Humphrey exudes a can-do, let-me-help attitude. That approach, combined with his extensive connections in academia, business and industry, and government, have helped position UMaine like few others. Unsurprisingly, Humphrey turns the point away from himself and toward something larger.

Humphrey still considers himself to be the “sidewalk superintendent.”

“I look out my office window and I can see the building,” Humphrey said, referring to the nearly finished Ferland Engineering Education and Design Center. “I don’t just stand at my window all day and watch them, but I’ve been watching the progress closely. I am keep- ing track of what’s happening. It’s like, the sidewalk superintendent finally gets his really big project.”