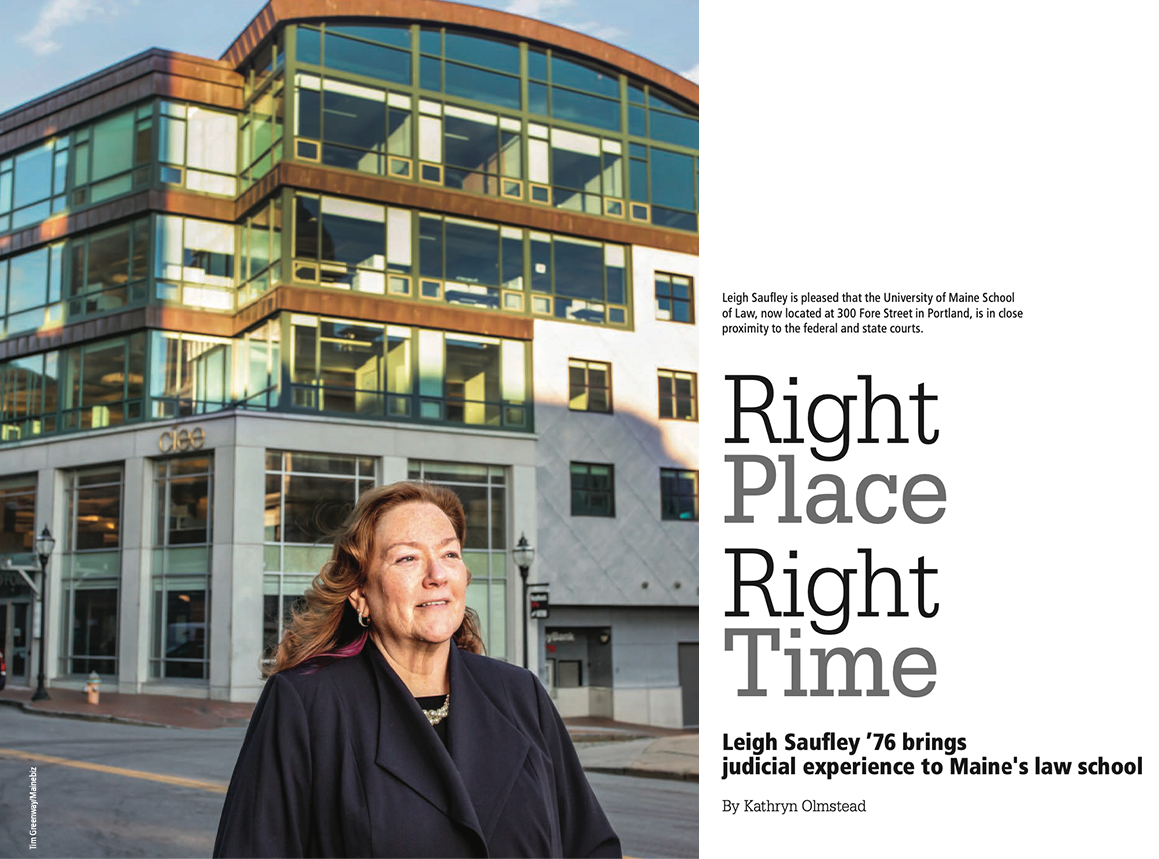 
WHEN UNIVERSITY OF MAINE System Chancellor Daniel Malloy invited Maine Chief Justice Leigh Ingalls Saufley ’76 to become the eighth dean of the University of Maine School of Law, her first thought was, “I have the best job in the world. Why would I want to go to an institution that is struggling?” After Malloy left her office two hours later, she immediately called her husband and said, “We have to talk.”

That conversation in early 2020 inspired the chief justice of the Maine Supreme Judicial Court to end a 30-year career on the bench and return to the university system that had nurtured her as an undergraduate in Orono and law student in Portland. She thought the chancellor had come to seek her opinion on the school, which was losing programs and professors and suffering from a lack of resources. She had been watching the institution “with half an eye” because it produces most of Maine’s lawyers. She had reason to care about its future.

Listening to Malloy and his vision for the Law School inspired her. “I was intrigued by his plans,” she recalled in a recent interview. “He understood what a Law School needs. He had a respect for the rule of law and the need for well-trained lawyers.” Malloy had not met Saufley before his visit, but quickly understood why others had recommended her for the position. He had done his research and recognized she was what the law school needed. “She is a brilliant individual with great experience and skill sets to turn the Law School around,” he said recently. “I stayed in front of her; I wasn’t going to leave,” he said of his strategy for persuading her to change careers. Also a former attorney, he told her how he had left the practice of law to enter government in Connecticut, where he served as governor before coming to Maine in 2019. He surmised his visit was “a longer meeting than she had bargained for.”

Within a week they had nailed down the details, and she shifted from considering retirement and wondering what she would do next to becoming Dean of the Law School. She also works with the University of Maine Graduate and Professional Center, which supports cross-disciplinary courses in law, business, policy, and health dedicated to preparing students for today’s economy.

SCHEDULED TO begin April 15, 2020, she eagerly anticipated the opportunity to interact with law students. On March 15, the COVID-19 pandemic forced Governor Janet Mills to declare a state of emergency in Maine. When Saufley arrived in the famous “Round Building” that houses the Law School, there were no students. “But even over Zoom, and then when the students returned in 2021, they were every bit as wonderful as I had hoped for — passionate about justice, optimistic that ‘We can change the world. We can make the world a better place.’”

The 2022 recipient of the Alumni Association’s prestigious Alumni Career Award, Saufley graduated Phi Beta Kappa in 1976 with a major in psychology and a minor in German. She wanted to go to Colby after graduating from South Portland High School in 1972, but UMaine was more affordable.

“Being a student at the University of Maine made all the difference in my life,” she said. “It was the best thing that could have happened to me. I made lifelong friends, the community was absolutely wonderful, and because of the breadth of courses available, I had the opportunity to cherry-pick the best professors. It was just a terrific education that inspired me in ways I hadn’t anticipated.” Initially focused on pre-med, she was lured by a good professor into psychology. Then, as graduation neared, she chose an elective that would influence her future: Constitutional Law. 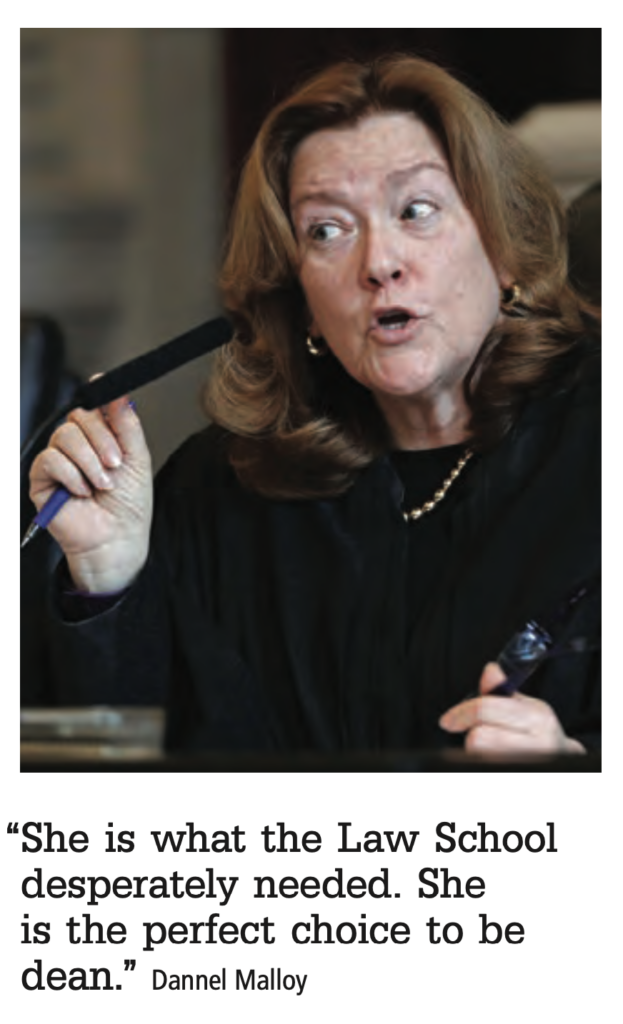 “I came out of Orono with a breadth of options and the knowledge that I was probably going to go to grad school,” she said, recalling the pleasure of being accepted by the Maine Law School in Portland. “Again, the opportunities offered to me through this university system made all the difference in allow- ing me to have a most interesting life.”

Saufley identified three turning points leading to her current place in that life: her first job in a small law firm in Ellsworth, ten years in the Attorney General’s office in Augusta, and 30 years as a judge at all three levels of Maine’s judicial system: District Court, Superior Court and the Maine Supreme Judicial Court. She succeeded Carolyn Glassman in 1997 to become the second woman on the Law Court bench and, when elevated to Chief Justice in 2001 at age 47, she was the first woman and the youngest person to hold the position. She was also the first Chief Justice to have served in District, Superior and Supreme Judicial Court levels.

The “first gift” she received as she launched her career in 1980 was the support of her colleagues in the all-male private practice of Silsby and Silsby in Ellsworth. “They were always there when I needed them. They were just terrific to work with,” she said. “They gave me a sense of confidence I might not have had walking out into a world where there were very few people who looked like me.”

In 1981, she joined the Attorney General’s office under then Attorney General James Tierney, a 1969 UMaine graduate. Her work in the human services division set the stage for a career-long commitment to making the law work for families in crisis. She handled child abuse prosecutions, civil litigation, prison and mental health cases, advancing to assistant, then to deputy attorney general.

“She was assigned the most difficult cases,” Tierney said in a recent interview, praising her ability to balance the law with the varied needs of parents, children, social workers and others involved in critical family issues. “She quickly showed judgment and a remarkable ability to understand the law.”

SAUFLEY CALLED HER ten years in the AG’s office the best opportunity to become part of the legal community. “Working with wonderful attorneys was an amazing education,” she said, adding that the wide breadth of case types gave her the ability to see a broad spectrum of solutions. The mantra was “Do the right thing,” she said, recognizing that few solutions satisfy everyone. “Attorneys must advocate for their clients. Finding solutions is a gift.”

When Governor John McKernan nominated her to a District Court judge- ship in 1990, she realized all the skills she had acquired came together in a job on the bench. “People come with some of the saddest and most difficult challenges life can bring them. It is such an honor to be a part of making the law, applying the law, figuring out how to make the law work for people who need it so badly. I just loved the job, in all three courts. It was just an amazing career.”

Governor Angus King appointed her to the Superior Court in 1993 and to the Maine Supreme Judicial Court in 1997. She began her first term as Chief Justice in 2001 under Gov. King, her second term in 2009 under Gov. John Baldacci ’86 and her third term in 2016 under Gov. Paul LePage ’75G.

Saufley’s contributions to the judicial system during her 30 years of service include coordinating the work of the District and Superior courts, improv- ing court security, creating specialty courts for opioid and business cases, and improving accessibility for non-English speaking people and those with physical and hearing limitations. She advanced efforts to digitize court records and initiated reforms in family law and in domestic violence, juvenile and adult treatment courts. She secured legislative funding for replacement of five county courthouses and, in the 2000s, she worked with Rep. John Martin ’65 to take the appellate court into high schools throughout the state to give students the opportunity to observe actual court arguments through the Courtroom to Classroom program.

This kind of real-life exposure to the legal process is part of Saufley’s vision for the Maine Law School. Clinics where students have real clients is one of the signature programs she hopes to expand. Students currently engage in a Refugee and Human Rights Clinic and a Prisoners’ Clinic, which helps individuals who are incarcerated with civil, financial, and family legal issues. She would like to expand the Domestic Violence Clinic, as well as the General Clinic, and extend the clinics into Maine’s rural counties. Other signature programs to expand include cybersecurity, environmental sustainability, and rural justice. “And this fall, we have a new, six-floor, modern, spacious, bright building,” she said of the new home for the Law School and Maine Center on Fore Street in Portland.

UMaine President Joan Ferrini- Mundy helped orient Saufley to academia and praises her vision for connecting resources of the Law School across the University of Maine System. “She is full of interesting ideas,” Ferrini-Mundy said. “She is open, curious, smart, kind, willing to listen to different opinions, and she is a synthesizer of ideas.”

Saufley’s past boss also has been able to offer some advice on how academia works. Former Attorney General Tierney now lectures in law at the Harvard Law School, and they have resumed contact. “She is what the Law School desperately needed,” he said, calling her a natural leader. “She is the perfect choice to be dean.”

Recently UMS trustees approved a change in Saufley’s title making her both dean and president to reflect the expanded role the Law School leader now plays in the university system.

“She brings a breath of new life to the Law School,” Malloy said, “She has risen to the occasion and adjusted amazingly well. She works hard, she’s competitive and wants only the best.”