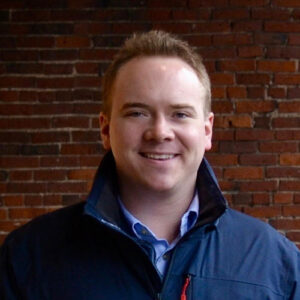 Jeff Rogers ’16 received the 2020 Rising Star Award for his dedication to the UMaine Alumni community.

While studying at UMaine, Rogers served as President of the Senior Skulls, an honor society pledged to uphold and promote the ideals of friendship, leadership, obligation, academics, and dignity, as well as the standards and traditions of the University. They work to encourage congenial relationships between students, faculty and alumni. He was also a Business School Student Ambassador and President of the Portfolio Investment Fund. As a member of Sigma Phi Epsilon, he served as an Alumni Volunteer Group Board Member and coordinator of the annual Rock Against Rape fundraising concern. After moving to Southern Maine, Rogers became President of the Black Bears of Portland Alumni chapter, a group of recent UMaine graduates who have relocated to the area. During his tenure he has increased both membership and activity of the chapter. He hosts the popular Cocktails of the Coast event and established the Black Bears of Portland Scholarship, which will award its first $900 to a UMaine senior this academic year.

A true advocate and supporter of the university, Rogers is committed to furthering relations between the University of Maine Southern Maine Alumni Chapter and Black Bears of Portland.