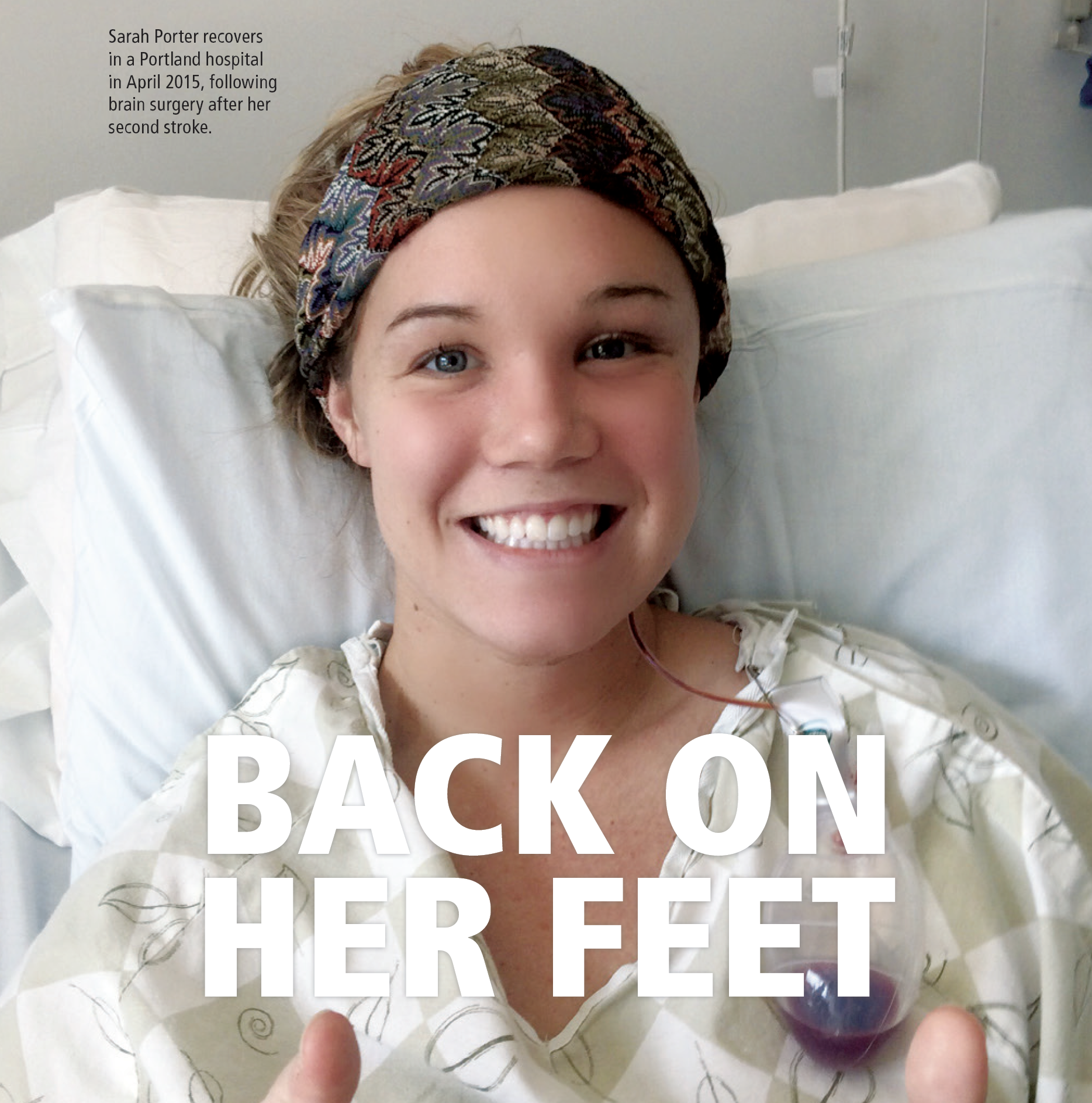 Sarah Porter stands up for heart and stroke awareness

Presque Isle native Sarah Porter ’13 was completing her sophomore year at UMaine when she suffered a debilitating stroke. Having recovered, she now works with stroke patients and serves as a national spokesperson for the American Heart Association/the American Stroke Association. She shares her story.

Growing up with parents who were both UMaine grads, I decided early on that the University of Maine was the only college for me. During my senior year of high school, I got a full scholarship to attend, and couldn’t wait to start my new adventure in Orono. At the time, my brother was also at UMaine. My years at UMaine started off better than I could’ve imagined. UMaine offered many opportunities to continue being active. Soccer, basketball, tennis, running, crosscountry, and skiing—you name it, I was doing it. On campus I also joined Team Maine, participated in Student Government, and was a Sophomore Eagle.

At the end of my sophomore year, when I was 20 years old, I had never been happier. In April of 2011, a week before finals, I was sitting in math class when I suddenly began to feel dizzy and disoriented. A student sitting next to me grabbed my arm and said, “Are you OK? I think you just had a seizure.” Although I was starting to develop a severe migraine, I quickly brushed her off , explaining that there was no way that was possible, and that I was fine. I stood up from my desk and tried to ignore the weakness in my arm.

It didn’t take long for my symptoms to become more pronounced. I figured I must be tired or stressed, so I decided to head back to my dorm to lie down. However, my right leg suddenly became too weak to support me. At that point, I felt very anxious, and struggled back to my room. My mom is employed as a physician’s assistant and my dad is a nurse practitioner; I had never been so relieved to have two medical professionals in the family, and the first thing I did was call them. They asked me a few questions, but abruptly stopped me and said, “We are calling your brother. You need to get to the hospital immediately. We are driving to Bangor now.” Hearing the panic in their voices, and sending me to the hospital for the first time in my life was the moment I realized that something was seriously wrong.

I woke up three days later with very little memory and no mobility. I was scared and confused. Due to my memory loss, it was like my entire sophomore year hadn’t happened, and I couldn’t figure out why I was in the hospital in the first place. When I was able to orient myself and comprehend information, the doctor told me I had suffered a stroke, but no one knew why. To be honest, I thought they were insane; 20-year olds didn’t have strokes, and I was the picture of health with no medical predispositions. It took me months of rehab to relearn how to walk, and memory retention exercises to alleviate my short-term memory loss. My number one priority became learning how to live independently again and getting my life back.

That experience was life-changing, to say the least. I went through all of the stages of grief, and then circled back again. My recovery was long and hard, full of good days and bad days, and every day I asked myself, “Why did this happen? Why me? Why now?” I knew I had to eventually get to a point where I turned a very negative experience into something positive, but I couldn’t see how to do that just yet.

The one silver lining through that experience was that I was part of the UMaine community when it happened. I had friends, classmates, faculty, and administrators visiting me in the hospital every day, sometimes 15-20 people at a time. I was showered with cards full of encouragement and support, and little gifts like flowers to try to cheer me up. My friends sent me pictures to help me feel like I was [on campus] at Maine Day and throughout the final week of school.

My teachers waived my finals that year, and spent my junior year helping me relearn my sophomore class material, on top of my junior year coursework. It still blows me away how fortunate I was to be a part of a community that cares so much for each other, and when tragedy strikes, pulls together to offer help, support, and love to those who need it. There is no doubt that UMaine helped me get my life back, and I will always be grateful for everything it has given me. When you are a member of the UMaine community, you don’t just get a degree; you get a family.

A year after my stroke, at the end of my junior year, I was thinking about what I wanted to do post-college. I thought a lot about what I had been through during the past year, and how I could turn that horrible, challenging experience into something positive and worthwhile. My advisor encouraged me to apply for a master’s degree in public health (MPH), and after my UMaine graduation, I attended Columbia University’s MPH program, concentrating in health policy and management. I wanted to ensure that people who suffered strokes would have the best policies, programs, technology, and health insurance at their disposal to maximize their chances at a full recovery.

My two years in Manhattan went by in a blur. I received an incredible education from some of the top health care professionals and researchers in the world; I was surrounded by classmates from all over the world with amazing life stories; and I had begun to volunteer with the American Heart and Stroke Association. I was starting to apply for jobs and transition into the real world.

But three months before graduation, I came home from the gym experiencing the same symptoms that I had four years earlier. My first thought was, “This can NOT be happening again.” However, I immediately walked the two blocks to New York Presbyterian Hospital’s emergency room, went to the triage nurse, and explained what was happening before my symptoms progressed to a point where I wouldn’t be able to communicate.

At my request, I was sent back to Maine and underwent two surgeries to remove the malformation in my brain that had been causing my strokes. I wanted to be closer to my family and have the procedure done by the neurosurgeon that I had been working with for four years. By early April, I had completely lost my speech and control of my right arm, had significant short-term memory deficits, and developed a life-threatening brain infection that required antibiotic injections to my heart three times a day for two months. When I was 20, I thought that my stroke was the worst thing that ever happened to me; at 24, I realized that this time was much worse.

Much to the shock and amazement of my medical providers, loved ones, and the Columbia community, I was able to complete my education and attend graduation that May. I couldn’t communicate well or take care of myself at that time, but the biggest motivation throughout those few months was to finish the degree I had worked so hard to obtain. I was able to persevere and achieve that goal, and to this day I still don’t know where I got the strength to do so. I’d like to think that UMaine instilled it in me four years earlier.

After graduation, I went back to Presque Isle for the summer to recover, learn to live independently again, and endure massive amounts of speech, physical, and occupational therapy in order to eventually use my degree and enter the workforce. If everything happens for a reason, then I believed this latest experience was a glaring sign that my involvement with the stroke community was not done.

Over the past two years, I have dedicated my life to stroke awareness, research, and education. I am currently employed at Maine Medical Center’s Neurosurgery and Spine practice, where I have the fortunate opportunity to combine my educational background with my personal interests. As the quality data coordinator for the practice, I study patients’ post-surgical outcomes and use that data to create programs and resources to improve the outcomes for future patients. Every time I meet with stroke patients, I tell them that I deeply understand what they are going through, and I will give everything I have to help them improve.

During the past year, I also had the unique honor of being selected as one of 11 heart disease and stroke survivors representing the American Heart and Stroke Association as a National Spokeswoman. I have had the opportunity to travel, meet survivors of all ages and nationalities, and share my story in various media and publication outlets worldwide. It has been the opportunity of a lifetime, and every single day I am reminded that my story is spreading awareness in a way that could save someone’s life; in fact, I have heard several times now that it already has.

M any people have been touched by stroke or heart disease at some point in their lives, whether for themselves, their families, or their friends. It is important to spread education and awareness of the signs and symptoms, and to make sure people know what to do when they or someone they know is exhibiting symptoms. The more we know and the faster we act, the greater the chances are that survivors will be able to eventually get their lives back after stroke. I was fortunately able to do so, not once but twice, and I’m using my third chance at life to help reduce the chances of it happening to someone else.