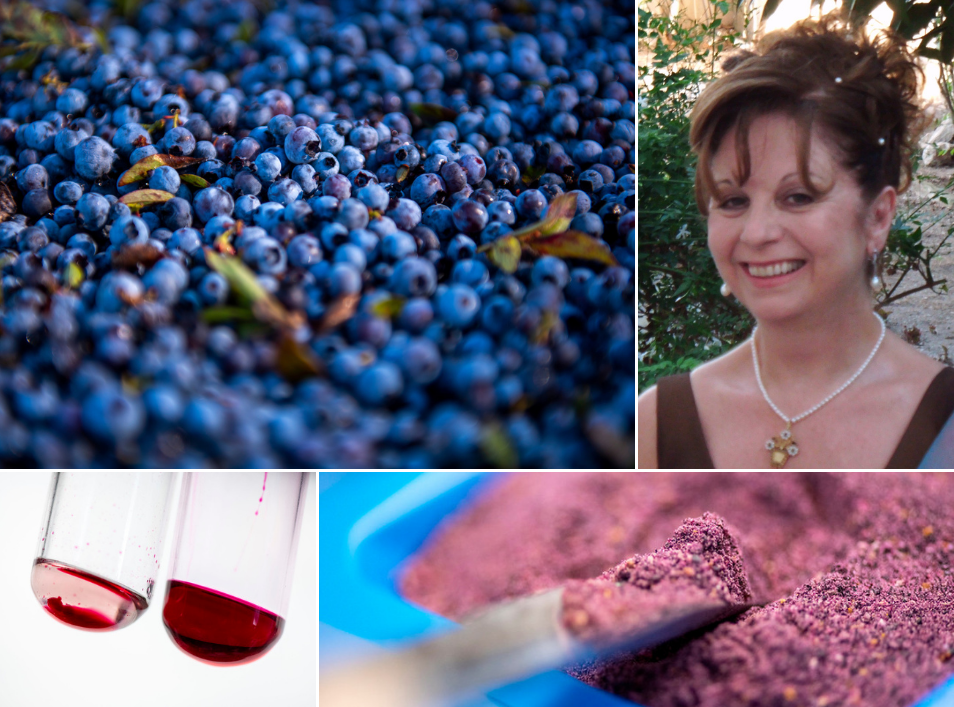 Black Bear alumni, faculty, staff, and students are among Maine’s most productive innovators and entrepreneurs. In this month’s column, we hear from Dorothy Klimis-Zacas, professor of clinical nutrition, cooperating faculty in the School of Biomedical Sciences, and associated faculty at the UMaine Institute of Medicine whose research focuses on berry bioactive compounds and their role on chronic diseases, such as cardiovascular disease, and metabolic syndrome. Dr. Klimis-Zacas has been researching the favorable effects of wild blueberries on human health for more than 20 years. Her recent work focuses on two classes of compounds extracted from wild blueberries — anthocyanins and phenolic acids — that have documented benefits in the treatment of chronic diseases. Specifically, Klimis-Zacas has found that phenolic acids extracted from wild blueberries significantly promote cell migration, new blood vessel formation and the speed of wound closure. For the last several years she has been working on commercializing a cosmeceutical, over-the-counter product for skin regeneration and wound treatment that uses wild blueberry extracts as the active ingredient.

Dorothy Klimis-Zacas: “My training is in the area of lipids and trace elements – as they apply to chronic diseases such as cardiovascular disease. I worked for years with the trace element manganese, studying manganese deficiency, and discovered its role in vascular function and lipid metabolism related to cardiovascular disease. That work led me to wild blueberries. Wild blueberries contain a lot of water, carbohydrates, some vitamin C, but very little in terms of other minerals and vitamins – except manganese. Manganese is the only trace element they are high in.

“A lot of the improvements in vascular function that we saw with reversing manganese deficiency, we got with blueberries too, and we started making comparisons and exploring the different health effects of wild blueberries. When we introduced blueberries in the diet, we observed beneficial effects on the vascular system. We conducted studies with hypertensive animals who had everything abnormal – high blood pressure, endothelial dysfunction, inflammation, all kinds of risk factors. We placed them on wild blueberries for eight weeks, and most abnormalities were normalized. Along with the beneficial functional changes, and after only six weeks of wild blueberry consumption, we found changes to the actual aortic structure to be less atherogenic. It’s fantastic – if I had 10 lives, I would study more about their effects on vascular function, more about their effects on inflammation, and on and on. From the published results of the original studies on vascular function, research into wild blueberries took off and I am happy to report that all of the other research that has been conducted on this subject validates our work on vascular function, which is wonderful.

“My most recent research project is the culmination of all my years studying the health effects of berries. In 2015, I started working with my Ph.D. student at the time, Panagiotis Tsakiroglou, to expose cells to different extracts from wild blueberries. We had already proven that eating wild blueberries could have beneficial effects on cardiovascular disease and inflammation, and we began extracting different compounds from freeze-dried wild blueberry powder and exposing endothelial cells directly to different concentrations of extracts. We got some results we didn’t expect, including finding that phenolic extracts enhanced cell migration and angiogenesis, or the formation of new blood vessels.

“So, we started thinking, if phenolic extracts help cells migrate faster and really stimulate wound healing, which conditions would require that?’ Burns, diabetic wounds, post-surgical wounds, pressure ulcers — we knew this could have a future in many, many areas of health care.

“By this time, my team and I had partnered with Jim Weber, UMaine associate professor of animal and veterinary sciences, to conduct pre-clinical studies in animals. We had filed a patent previously, and we participated in UMaine’s I-Corps and MIRTA programs as well as the I-Trep program. As part of those programs, we interviewed physicians, nurses and patients about their needs, which helped us modify the experimental design. From our studies with animals, we now know the concentration that is optimal to increase wound closure and skin regeneration and lower inflammation, and we eventually collaborated with an industrial partner to create a prototype gel and a prototype cream to test.

“At the beginning, we’d like to bring a cosmeceutical to the market – this does not require FDA approval, which takes many years. This product would be for skin regeneration and for small wounds — scratches and scrapes — and would be available over the counter. Right now, we’re testing our prototypes and also working on developing new products. I’ve had news-breaking research in the past about wild blueberries and their benefits on the cardiovascular system and their role as anti-inflammatory agents, and we are now seeing its application by bringing our results from the bench to the bedside. Not only can this topical product with a medical application help patients heal, it can also support Maine’s economy and wild blueberry farmers through the development of a value-added product.”


NOTE: The “Innovators of UMaine” series is supported by a grant to the Alumni Association from the Maine Technology Institute.