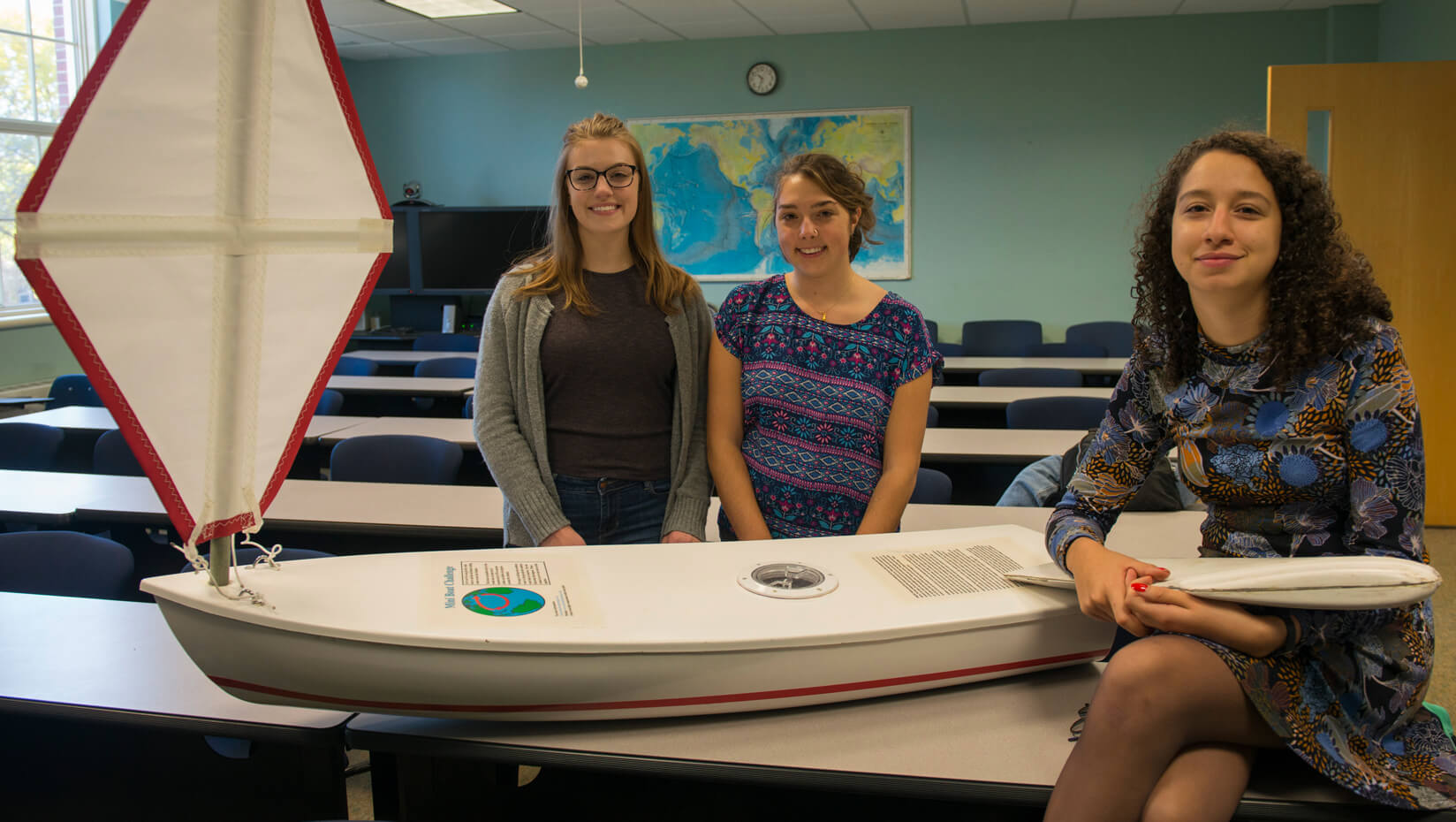 2016 Atlantic Miniboat Regatta with a nearly 5-foot unmanned sailboat equipped with GPS to track its voyage to Europe by way of the ocean currents.

The regatta is organized by Educational Passages, a Belfast, Maine-based program that teaches school-age children about ocean sciences. Since 2008, the program has worked with university partners and others to help elementary, middle and high schools sponsor and launch more than 50 small boats in Maine and across the globe.

Schools, colleges and organizations from as many as eight countries are scheduled to take part in this fall’s regatta. The goal of the event is to have as many of the little boats as possible circle the entire North Atlantic Ocean. Onboard GPS tracking will allow Marine Sciences Club members and other regatta participants to figure out when their vessels are close to making landfall. The minisailboats are expected to make multiple stops on their voyages around the North Atlantic. All of them will carry instructions, asking those who find the boats to take them to nearby schools. Regatta participants will then work with their new school partners to relaunch the boats.

For all its sophistication, the UMaine miniboat looks simple on the outside, a slightly larger version of the kind a toddler might play with in the bathtub. The nearly 5-foot hull is white with a red stripe around the base. A diamond-shaped, white sail with a red border stands upright at the end of the bow.

The Marine Sciences Club is partnering with the Maine Coastal Program on the project. Both are working with Educational Passages to get local elementary, middle and high schools to participate. Students will be able to follow the UMaine minivessel’s progress via the Educational Passages website.

Members of the Marine Sciences Club will test the seaworthiness of the small sailboat in the Alfond W2 Ocean Engineering lab in the UMaine Advanced Structures and Composites Center. It will then be transported to Portland. There, a member of the Portland Fish Exchange’s fishing fleet will take the minivessel out beyond the Gulf of Maine and launch it into the open ocean.

The miniboat is expected to follow the currents in the North Atlantic Gyre and, if all goes well, reach Europe in a few months. Along the way, its GPS will send pings back to club members twice a day. It will also collect wave, wind and other data that students will be able to study. It’s the same kind of data that Argo floats provide in real time, on the internet, as they bob along at different depths in oceans across the globe.