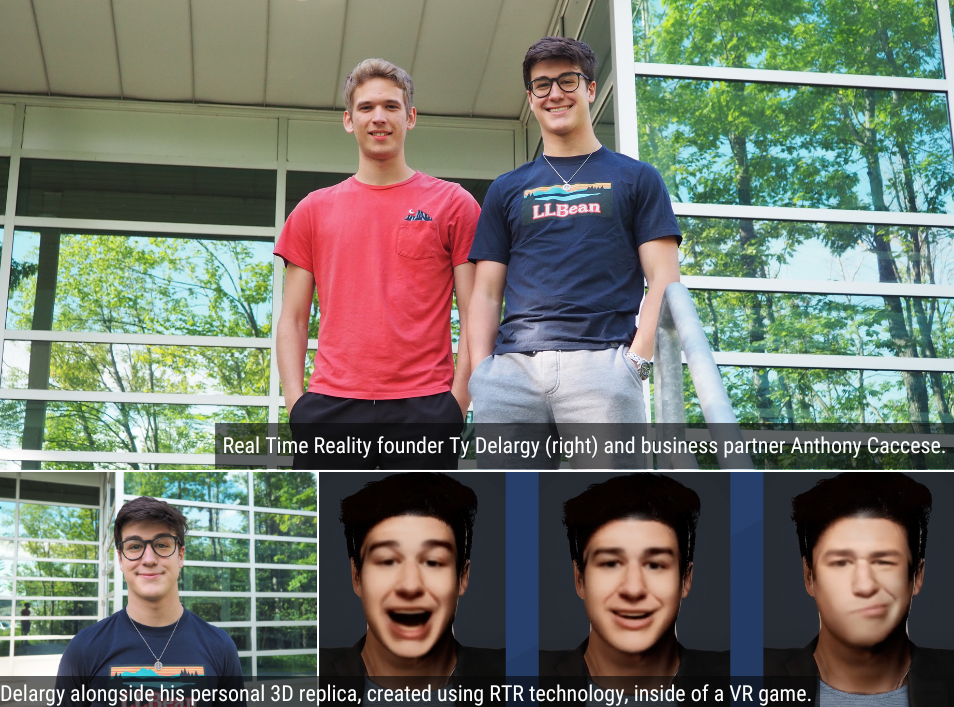 Black Bear alumni, faculty, staff, and students are among Maine’s most productive innovators and entrepreneurs. In this month’s column, we hear from Tyler Delargy ‘22, the founder of Real Time Reality, a company with a mission to stream real people — securely — to virtual reality (VR) or augmented reality (AR) spaces. For Delargy, who majored in computer science at UMaine, the goal is to have the capability to stream reality into virtual spaces rather than just fiction. Delargy founded the company at the start of his senior year and has incubated Real Time Reality (RTR) at the Foster Center for Innovation while taking advantage of business and pitch coaching opportunities available at the center. Delargy and business partner, Anthony Caccese (a rising junior computer science major), won the 2022 Big Gig pitch competition finale, netting a $5,000 cash prize they have used to fund a summer intern through the Innovate for Maine program and purchase equipment to grow their business. The company has also secured funding through Maine Technology Institute and reached the Greenlight Maine Collegiate Edition finale.

Ty Delargy: “Last year, as I was looking ahead to graduating into the world of software, I just wasn’t excited about the idea of going to work for the big companies like Google and Facebook. That’s really considered a good résumé builder and your ticket to other opportunities, but from a privacy standpoint, I disagree with a lot of those companies’ practices. I got to thinking about my own interests and the internet as a whole. Since high school, I’ve been enamored with VR technology. From day one, I believed that it would be huge once costs go down and demand goes up, but I was also worried about internet authenticity and how even in our current internet we can rarely tell fact from fiction. Being cooped up during COVID while all that stuff was happening around me sort of created a pressure cooker for me to be inspired to create a VR company that was driven by an ethical mission.

“Our mission is to bring authentic human interaction into virtual reality. We’ve done this by creating a never-before-seen technology we call ‘reality streaming.’ We can stream a real-time 3D replica of any person into VR experiences in which you look and move just as you do in the physical world. Our technology provides immersion like never before, where virtual humans are as unique, realistic, expressive, and identifiable as their real-world counterparts. This multiplies the value of immersive experiences in enterprise or consumer settings by making virtual reality more social and a real analogue for human communication through facial and body language.

“Virtual and augmented reality are some of the fastest growing industries today, with a current combined market opportunity of $38.3 billion. In my generation, 87 percent of us play video games on a weekly basis, and by 2030 we will be the plurality of the global buying power and workforce. Put simply, we are headed towards a 3D internet for work, play, and everything in between, dubbed by many as the metaverse.

“Our go-to-market strategy is to initially operate RTR as a game studio where we will create enterprise and government training applications under contract. For example, we’re speaking to police departments about creating force de-escalation and community interaction training for safer policing. On the enterprise side of things, we can create training for compliance, retail workers, salespeople, managers, nurses, therapists, teachers, and more. VR is proven to offer enhanced learning benefits, and our service increases the soft-skill learning capability for VR tenfold, making us an easy choice for any enterprise or government VR needs.

“Eventually, we will get to mass market consumer VR, where we hope to provide a software service for the public in which we securely and privately stream real people into any video game or entertainment experience with a stamp of certified authenticity. But for now, we are continuously improving our product as we accept clients.”