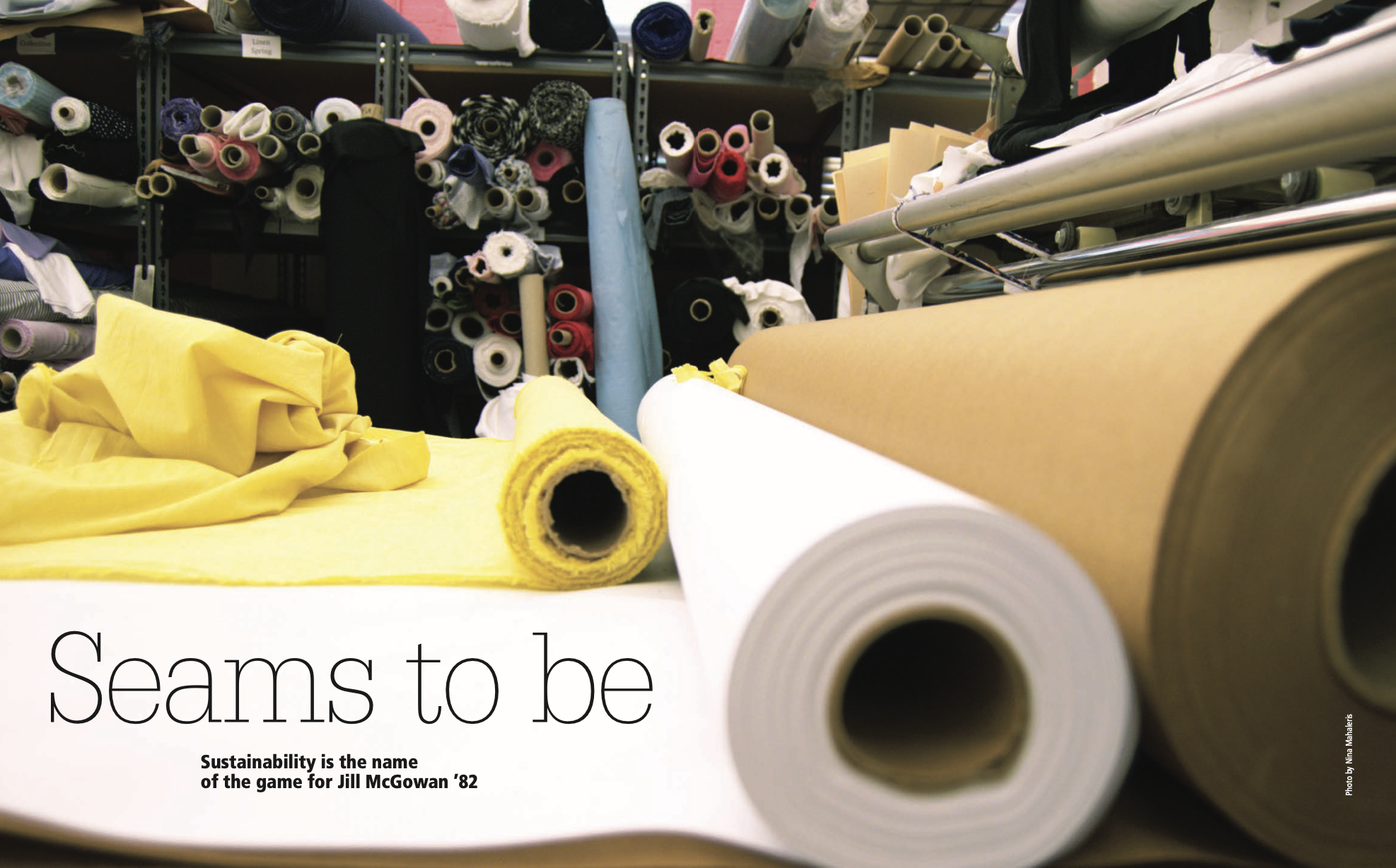 AS A PROMINENT FIGURE in women’s fashion for nearly 30 years, making quality clothing that stands the test of time is what it’s all about. Launched in 1994 with a series of white shirts, Jill McGowan’s eponymous brand has become a house- hold name in the women’s clothing industry.

McGowan’s work has been featured in publications including Women’s Wear Daily, Harper’s Bazaar, The New York Times, and her designs can be found in hundreds of specialty stores across the U.S. Her iconic white shirts even landed her an appearance on “The Martha Stewart Show” in 2010.

While the Pittsfield native learned how to sew as a child, often designing outfits for school with her sisters, she hadn’t always planned on a career in clothing design. “It wasn’t really on my radar at all; I didn’t know anyone who made a living in product development,” McGowan said. 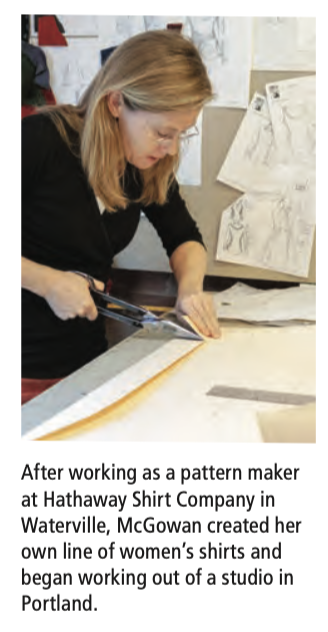 As an undergraduate at the University of Maine, McGowan ’82 studied international affairs and German — an interest that led her to study abroad in Salzburg, Austria, during her junior year. That trip had a big impact on McGowan, and paved the way for her future career in clothing design and production.

“I think that a lot of decisions were informed by my study abroad,” she said. “UMaine definitely opened my mind in so many ways.” While living in Europe, McGowan said she was influenced by the quality of everything she saw — from the architecture and building structures down to the fashion.

She noticed that while her peers didn’t have a lot of clothes, the pieces they had were good quality and lasted a long time. “I remember having some items [from Europe] that just lasted so long and [I] loved that,” McGowan said. That emphasis on sustainability and longevity formed the foundation for the Jill McGowan brand down the line — quality clothing that lasts.

But McGowan didn’t dive right into a career in fashion after graduating from UMaine. She contemplated other career paths, including a brief interest in going to law school. “I ended up waiting tables throughout my 20s,” she said, noting that she couldn’t find anything that suited her background in German and international affairs.

Then, after meeting costume designers while working on a film project, McGowan said she was inspired to explore apparel design programs — which led her to enroll in a two-year program at the Fashion Institute of Technology (FIT) in New York. “I ended up going on a fast track of patternmaking technology,” said McGowan, who was 29 years old at the time.

The program was intense. The professors didn’t go easy on their students or their designs, McGowan recalled during a live interview with Portland Press Herald reporter Mary Pols in 2017.

But she made it through. “The nicest thing I heard was that I had what it took,” McGowan told Pols. After FIT, she took an internship with a start-up company but later decided she wanted to return to Maine. So, when she saw a job ad in the Maine Sunday Telegram seeking a patternmaker, she applied and made the journey back home. 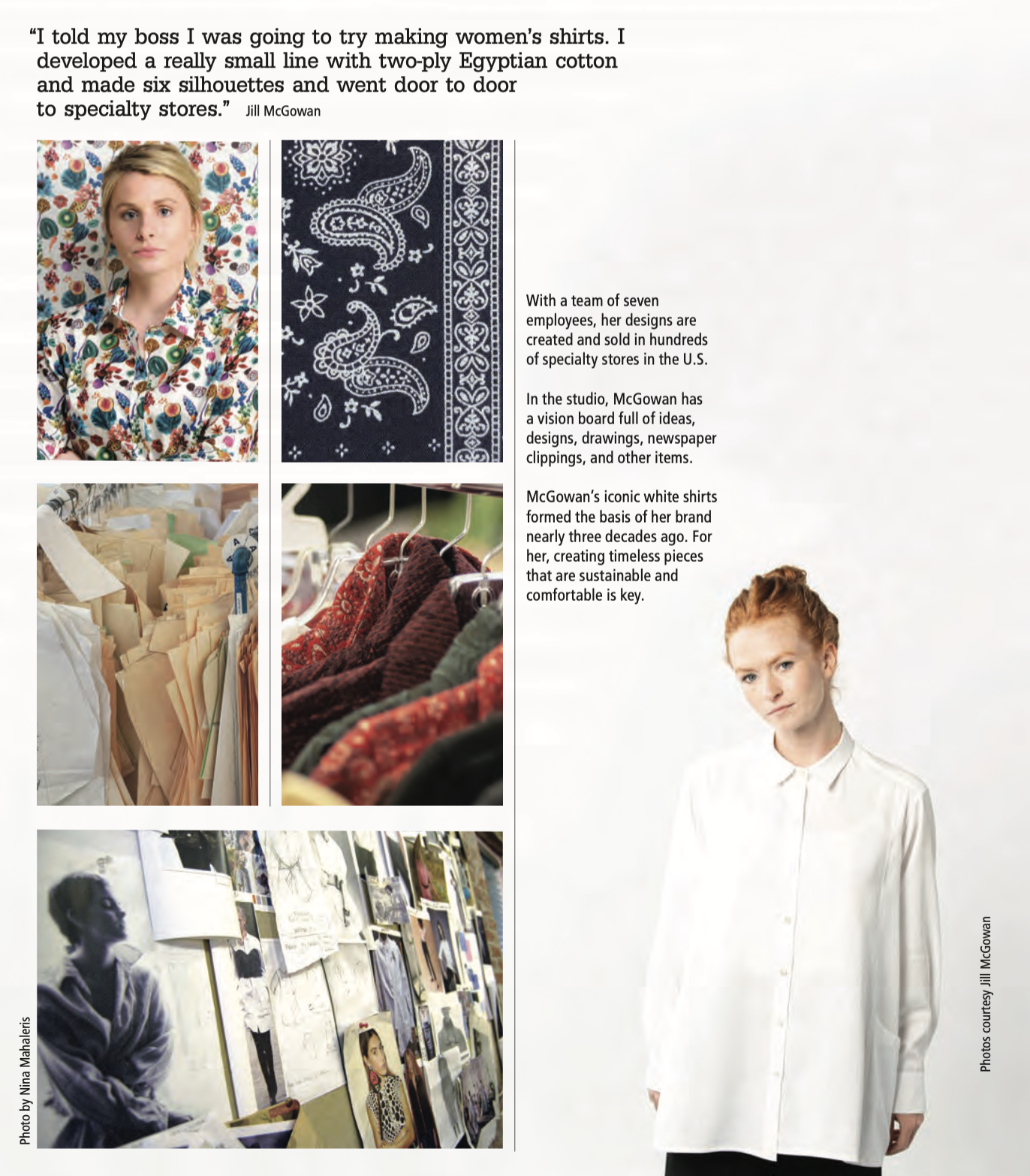 For the next three years, McGowan worked at Hathaway Shirt Company – a manufacturer for men’s shirts founded in 1837. Headquartered in Waterville, Hathaway was a big operation, McGowan recalled.

The shirt factory had over 200 employees when it closed for good in 2002, according to the New York Times. While 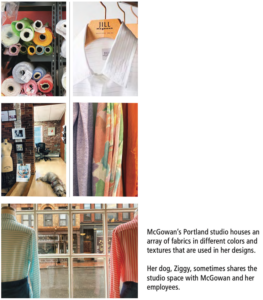 working at Hathaway, McGowan realized a disparity between the quality of men’s and women’s clothing of equal price. Wanting to improve the standard of women’s clothing, McGowan soon decided to branch out on her own.

“I told my boss I was going to try making women’s shirts,” McGowan recalled to Pols in 2017. “I developed a really small line with two-ply Egyptian cotton and made six silhouettes and went door to door to specialty stores.”

That decision kicked off a career in clothing design and production spanning nearly three decades. Though the Jill McGowan Company isn’t the large-scale operation Hathaway’s

once was, it feels like the “right size,” said McGowan, who sources most of the fabric for her designs from Europe.

“I did think that it should go big; maybe for four or five years I was trying to scale it up but it just was a great lesson that it isn’t meant to be, and now it isn’t what I want,” she said. “I think the pandemic informed that a lot, [it] helped shape my priorities,” McGowan added. With seven employees, a studio on Casco Street, and a boutique on Exchange Street in Portland, McGowan is content with the company’s scale. “It just feels like I’ve kind of grown into the idea of having a small operation,” she said.

She’s been in the clothing design game nearly 30 years, but McGowan, 62, doesn’t have retirement on her mind; she’s thinking about what comes next.

“I don’t think I’m going to retire, I really love what I do,” said McGowan, who also teaches patternmaking technology and design at the Maine College of Art and Design.

McGowan also stresses the importance of sustainability with her students, encouraging them to consider the quality of the fiber and fabric they’re choosing for their designs. That’s the key for the Jill McGowan brand and what will help keep the company moving forward. For now, McGowan said she’s focused on sustaining her company, which could mean looking to bring on new employees to replace those nearing retirement. 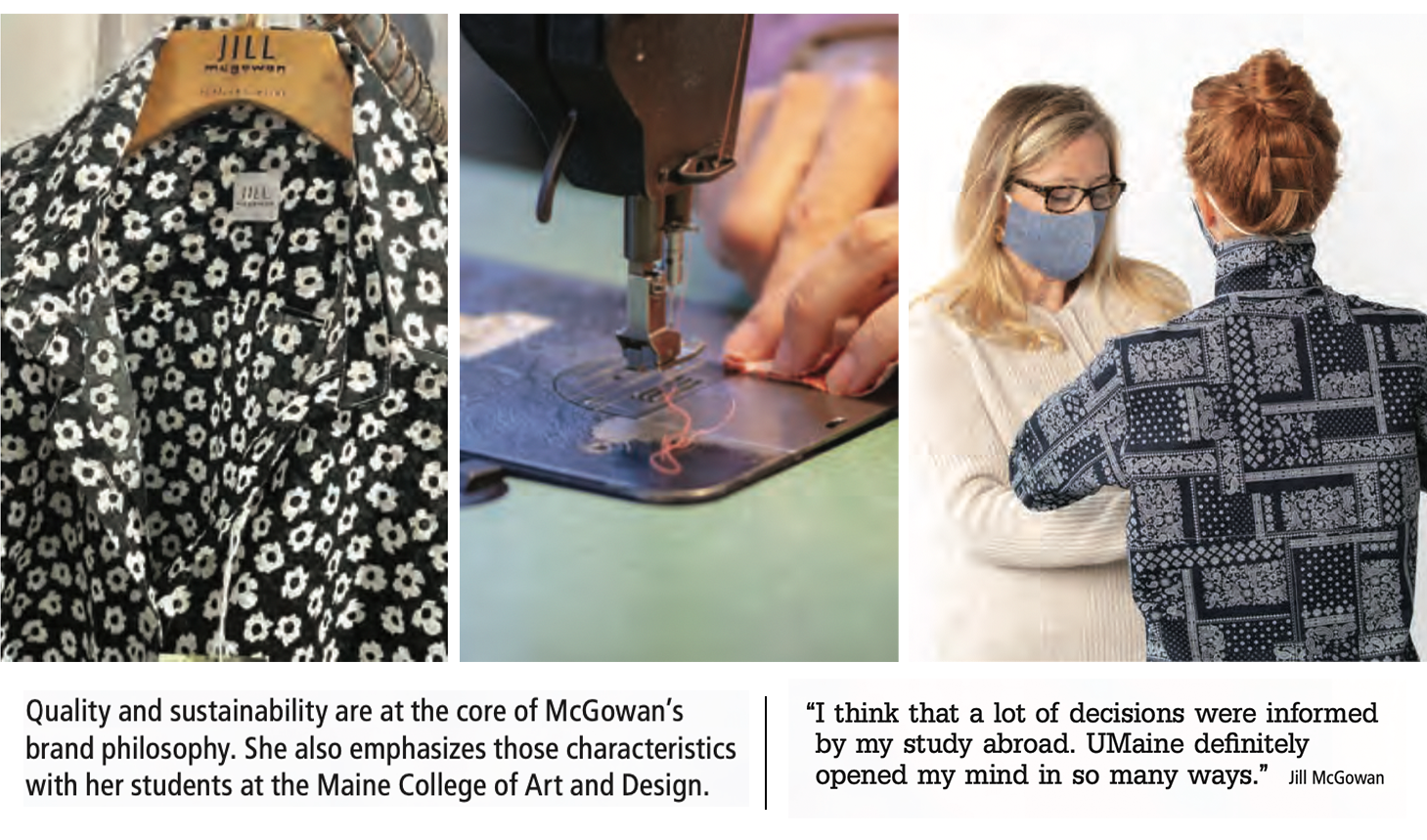