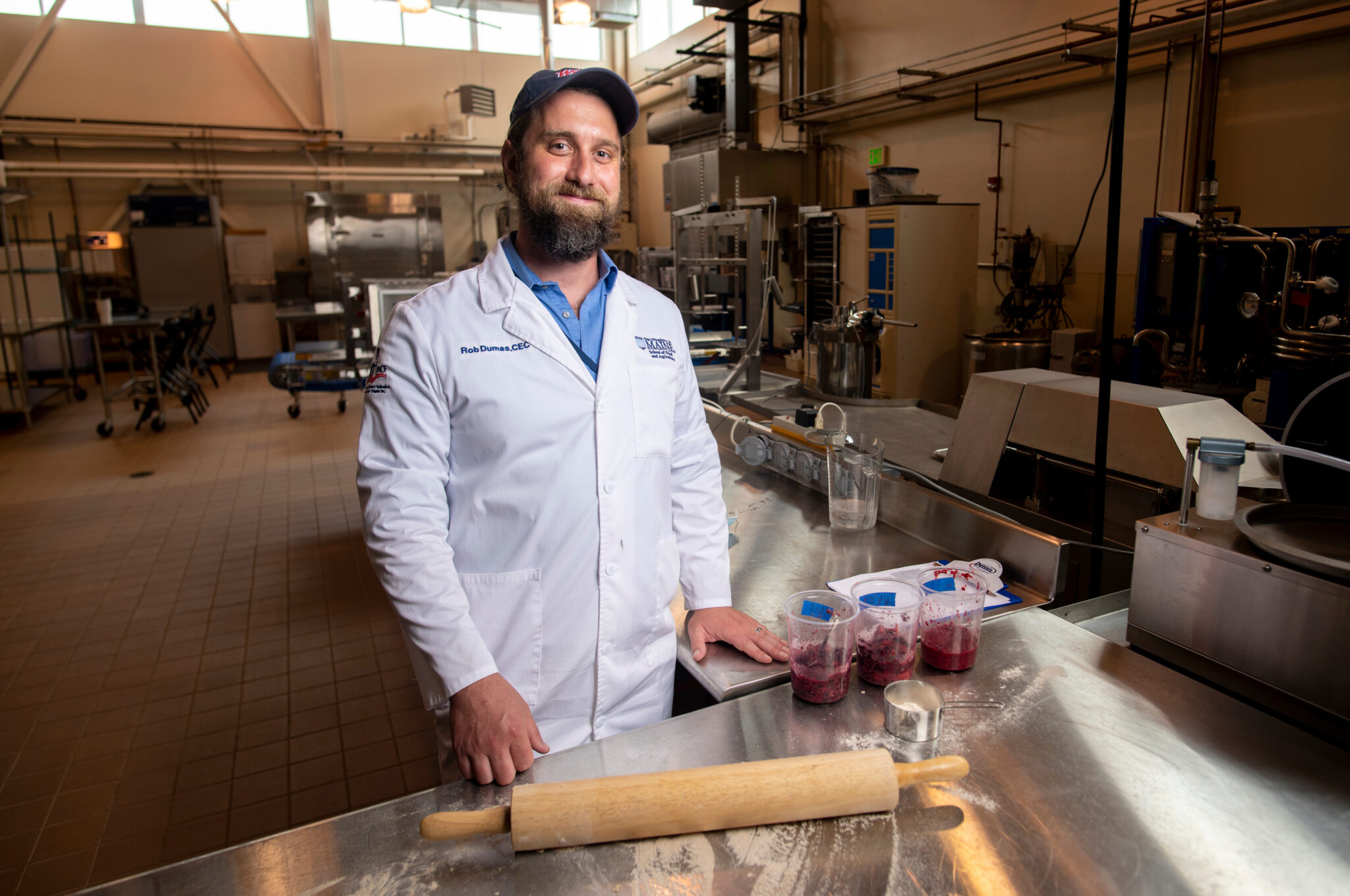 A native of Slidell, LA, Dumas started his career in restaurants around New Orleans with a plan to attend culinary school on the GI Bill. After five years as a cook aboard the U.S.S. Oklahoma, a submarine based out of Norfolk, VA, Dumas joined the Presidential Food Service, serving as a chef in the White House Navy Mess located in the West Wing of the White House during the first Obama administration.

After leaving the White House and separating from the Navy, Dumas relocated to Vermont to teach and study as a Fellow at the New England Culinary Institute (NECI). Dumas’ time at NECI only strengthened his interest in seasonal cooking and local agriculture, and it was Maine’s diversity in these areas that lured him to the state in 2016. Since joining UMaine in 2019, he has been focused on expanding education, outreach and contract work for Maine’s food industry.

“Joining the university in this role within the School of Food and Agriculture with a link to the Office of Innovation and Economic Development was appealing because of the dynamic nature of the position. It was an opportunity to engage with folks from throughout Maine’s food system, and I was given carte blanche to learn and immerse myself into every facet of that system. In addition, working at the university offers proximity to so much other expertise. Being able to collaborate with the leading experts in blueberries or aquaculture not only helps sate my personal curiosity, but also expedites my learning so that I can be more useful to my clients and the community at large. I love being surrounded by so many smart and curious people, and I’m grateful for the opportunity to interact with students and help them develop. The job was a perfect fit on a lot of levels.

“There is so much happening in Maine in food. Over the last year, I’ve done a lot of work with the Alliance for Maine’s Marine Economy, demonstrating techniques for preparing Maine seafood products developed with investment from the alliance. Maine is truly leading through that effort, and it’s exciting to be a part of a movement that is both ecologically and economically sustainable and provides new career opportunities for young people in Maine’s coastal communities. I also understand that Maine has more young farmers and more young people engaged in agriculture than any other part of the country. Between the Department of Agriculture, Maine Farmland Trust, the Maine Organic Farmers and Gardeners Association, and many others, including UMaine, we have a robust network to train and support people getting into both agriculture and the more technical aspects of food production and processing. Right now, I’m working on a grant-funded activity with Cooperative Extension educator Kathy Savoie where we’re engaging with culinary educators and young culinarians in Maine’s Career and Technical Education high schools all around the state, teaching them about Maine’s food system.

“The world around us is changing. We don’t have control over some of those external factors, and we’ll have to evolve ourselves, including the way we eat, to exist within whatever the future looks like. The food system evolution that we’re seeing nationally is happening here in Maine as well, and that dovetails beautifully with the conversation around innovation. What does the food of the future look like? What kind of practices can we engage in that are sustainable and regenerative, but also economically viable and fair to the worker and to the consumer? To answer those questions, we have to have innovators who are willing to try new things and make mistakes and learn from those mistakes to get to solutions.

“Outside of those innovators, we need a support network of people that are helping to educate consumers about those foods, helping to explain their importance, and helping to get them into people’s diets. I spend a lot of my time working with producers, alliances, and associations to support the work of taking Maine food products, and bringing them to market in new, efficient, delicious ways that consumers can connect with. The ultimate goal is getting more Maine foods out there into the market space and telling stories that connect the dots for consumers on how to eat these foods and why they should be eating these foods. It’s a privilege to play a role in that, and it’s a lot of fun, too.”