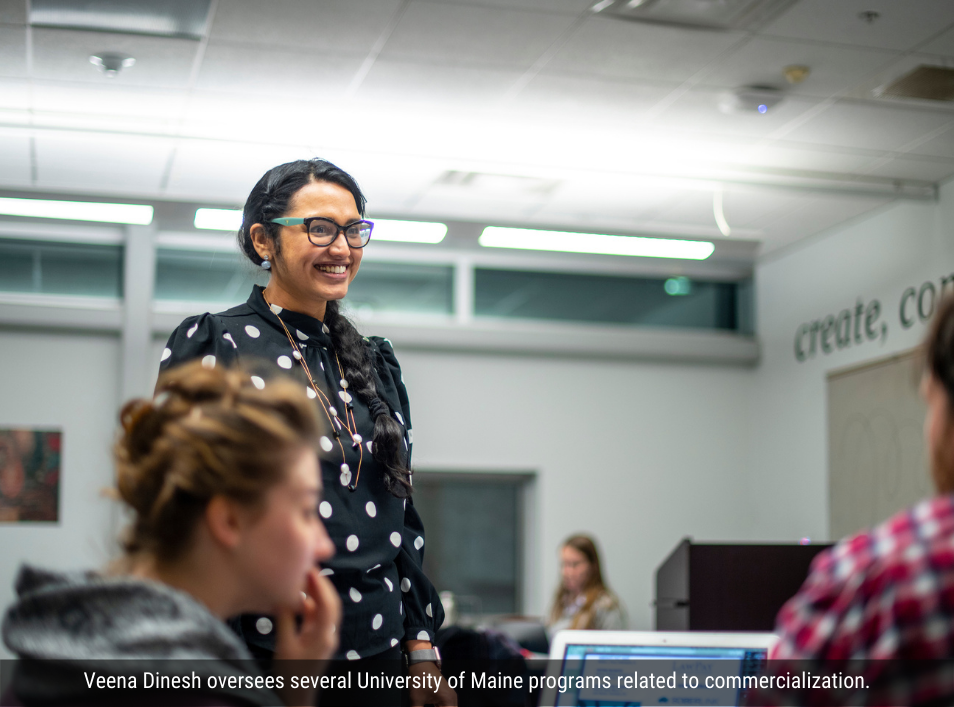 Black Bear alumni, faculty, staff, and students are among Maine’s most productive innovators and entrepreneurs. In this month’s column, we hear from Veena Dinesh, whose role is to help UMaine’s innovators bring their ideas to life. As the university’s director of business incubation, Dinesh leads efforts to accelerate university innovations, coordinating several programs that help faculty, staff, and students understand the market potential of an idea or research discovery and find the right path to move it ahead. As UMaine prepares to launch its fifth cohort of the MIRTA accelerator program, which is designed to advance university research innovations on the path to commercialization, Dinesh discusses UMaine’s unique approach to commercialization and the many roles alumni can play in this process.

Veena Dinesh: “I came to UMaine in 2017 when the university was examining and redefining its approach to commercialization. At UMaine, there are several ways for researchers to approach the different aspects of commercialization and the goal is always to develop real-world applications for university research that can solve problems and help improve lives. It’s an opportunity to broaden networks of collaboration and expand impact, offer experiential learning to students, and to be recognized for the value of specialized expertise.

“We set out to build a culture of innovation and commercialization and actively encourage participation from all disciplines — this isn’t just for STEM researchers. Step one was establishing the commercialization training workshops to provide information on related topics and answer common questions. From there we thought about what else we could do, and we saw that there was a need for a more focused program that came with funding and other resources, and that’s how we developed the MIRTA accelerator in 2018. Later that same year, UMaine was selected by the National Science Foundation as Maine’s first I-Corps site, giving researchers another avenue to access funding and guidance to help them explore the commercialization potential of an innovation.

“About five years into this, we’ve built a lot of capacity to nurture early-stage ventures. These programs are designed to feed into one another — the Commercialization Training Series is informational, people who are ready to take the next step go into the UMaine I-Corps site program, and from there they move to MIRTA, which replicates the accelerators that you see in the startup world. That model brings together startups with high growth potential and gets them access to learning sessions, mentors, and funding, to accelerate their progress. We brought a version of that into the university system. The teams that go through our MIRTA program aren’t startups; they’re really early stage, but they have great potential. Through the program, we offer that suite of resources, teach them how to communicate about their ideas, and guide them as they think about the best commercialization pathway for their solution. It could be forming a startup, or it could be partnering with an existing company, or they might directly interact with the end user. The point is to inculcate that entrepreneurial way of thinking, which is very different from the way an academic researcher is trained to approach things. While it’s a relatively new effort, we’re seeing real results — the 17 teams to go through MIRTA so far have raised more than $2.3 million in external funding and through prototype sales, and seven startups have been formed.

“We started out with the goal to accelerate UMaine research innovations through MIRTA, but the vision for that program is much broader and, with support from the Maine Technology Institute, we’re expanding it to support teams from other Maine research institutions. Maine’s entrepreneurial ecosystem is unique for how close knit it is, and that’s an opportunity to work with statewide partners to offer these projects basically a continuum of care from the early-stage support that we provide to the next phases of acceleration and support that are crucial to keep them moving forward. We have a real need for mentors to work with teams as they go through our programming, but for those who choose the startup path, there’s also a need for individuals with entrepreneurial experience who can serve in fractional executive roles to manage the business side of things to help these companies grow. It’s a great opportunity for alumni to stay involved with UMaine and help Maine innovations thrive, and I encourage anyone with related expertise and willingness to contact me directly. It takes a village.”