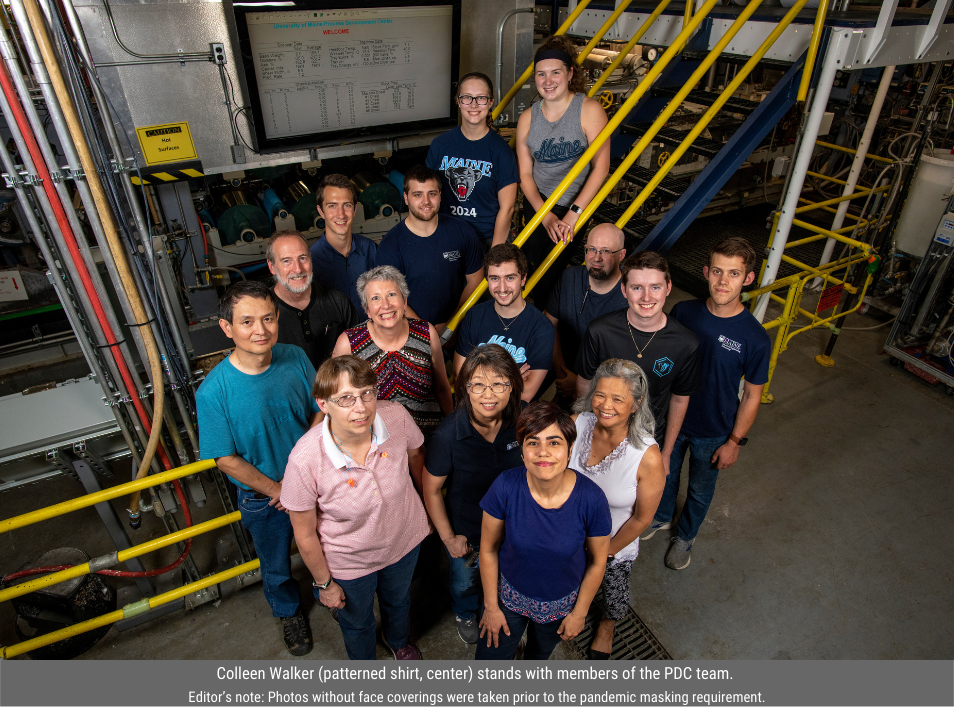 Black Bear alumni, faculty, staff, and students are among Maine’s most productive innovators and entrepreneurs. In this month’s column, we hear from Colleen Walker, director of UMaine’s Process Development Center (PDC), which has collaborated closely with the pulp and paper industry for decades. The facility was established to support industry needs, and is funded almost exclusively through contract work. Since 2013, it has been home to a pilot scale facility — recently expanded — for the production of nanocellulose, a renewable, biodegradable, high-performance material that is derived from wood and other natural fiber sources. UMaine is a nanocellulose research powerhouse, holding 87 patents on 12 technologies related to nanocellulose production and applications, and the university also drives innovation elsewhere by distributing samples of the nanocellulose it produces to companies and educational institutions around the world. For Walker, these connections are the building blocks of a bigger vision to establish UMaine as the heart of what she calls “Nanocellulose Valley.”

Colleen Walker: “California has Silicon Valley, and Maine is building what I like to call Nanocellulose Valley. We have the raw materials in our forests, the processing infrastructure both here at the university and in current and former mill facilities throughout the state, people who understand how to make nanocellulose and how we could use it, and the entrepreneurial spirit to make it happen. All the ingredients exist to make this state a hub of nanocellulose innovation – and it is starting, but we can’t rely on others to bring that innovation to us.

“The opportunity is huge. This is a great material and its potential is just limitless. All you have to do is look at the number of patents and publications out there that involve nanocellulose — they cut across almost every conceivable industry. UMaine is a research leader in this space, and the distribution role we play in getting this material out into the world is also really important. In order to innovate with a new material, people need to be able to freely experiment with it, and UMaine makes that possible through the samples we distribute to researchers and companies. PDC is a unique facility because not only can we produce nanocellulose for use in R&D, but once a process or an application is identified, we can help companies figure out how to scale up to a commercial state. We put a lot of effort into working with our clients and facilitating connections — through our annual cellulose nanomaterials forum, for example — that we hope will help drive new innovations.

“Working with biomaterials, it’s especially exciting to see how much innovation is being driven by sustainability right now. You’ve got entrepreneurs and companies really trying to find environmentally friendly replacements for the products we use every day, and so many industries are trying to innovate in that way. We recently began working with Kiefel, a company based in Germany, on renewable packaging. They’re looking to expand their expertise in fiber thermoforming and they approached UMaine because of our leadership in this area. PDC is now home to one of the company’s NATUREFORMER lab machines that can produce thin-walled smooth-surface items typically made from plastic — think of a yogurt container — from molded pulp. Collaborations like this show what innovation means to me — people working together on a cool idea that can solve a real problem.”