For Karlee Price, UMaine Means Opportunities–Lots of Them! 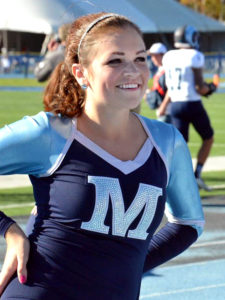 Four years ago, Winslow, Maine native Karlee Price gave the University of Maine a chance. Four years later and about to graduate, she has no regrets.

“I thought I wanted to leave the state (for college), but once it came down to it, I knew I wanted to come to UMaine because it had everything I wanted,” Price said of her decision-making process. “My family has all come here, and I knew they all had great experiences.” In fact, Price is a third-generation Black Bear.

Following her family’s lead, Price not only excelled in academics, but also became an active member of the UMaine community. She is president of Panhellenic Council, a member of Alpha Phi sorority, and a captain of UMaine’s Dance Team.

“I love getting to represent UMaine when I’m in my uniform,” Price said. She shared that one of her favorite on-campus events is Homecoming. During that weekend, Price performed at President Hunter’s house, where she had a chance to demonstrate UMaine spirit to visiting alumni and guests.

Like many students, Price went through a stage of being unsure about her major before choosing Communication Sciences and Disorders. However, the opportunity to do research introduced Price to various possibilities in her field. For the past three years, Price has been working with a team of graduate students on a speech therapy telepractice program led by Dr. Judy P. Walker.

Price’s career interest lies in working with aphasia patients. Typically caused by a stroke, aphasia is a disruption in one’s ability to communicate. Price is driven to help others and believes that there’s a great need for speech pathologists. Upon graduation, Price plans to attend graduate school and UMaine is her top choice.

Advice that Price would give to UMaine students is that it is never too late to get involved.

“Even if you are a senior, join a new club, try out as much as you can, see what really sparks your interest, and don’t be afraid.” 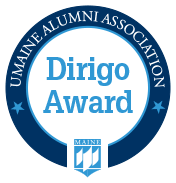