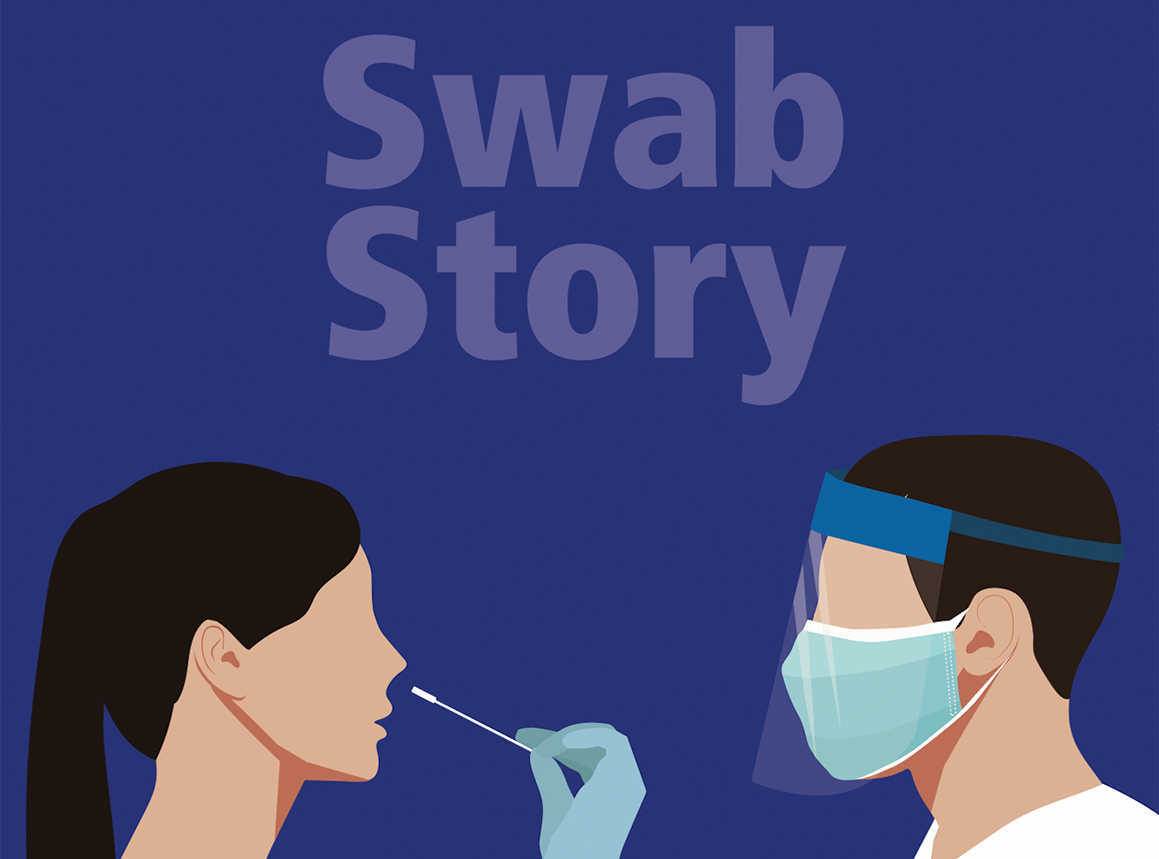 AS THE CORONAVIRUS PANDEMIC took hold in the United States in March of 2020, just about everyone who was able to hunkered down at home, social distancing and watching with alarm as the disease continued its relentless spread.

But Derek McKenney ’14 didn’t hunker down. Instead, his life took on a sense of urgency and mission that was unlike anything he could have imagined in the days before COVID-19 became a global byword.
That’s because McKenney, 30, was a senior manufacturing engineer at Puritan Medical Products Co. in Guilford, and the company was about to take on an enormous role in addressing the pandemic.

Though the Piscataquis County company was founded a century ago to make toothpicks, it is now one of the top two makers of specialized testing swabs in the world. Demand for its nasal swabs skyrocketed in response to COVID-19, and it became clear that the company would have to produce more right away.

“March 13 was the day,” he recalled. “There was a series of phone calls, and the White House [Coronavirus] Task Force was reaching out. That’s when we realized, wow, this is something. At that point, it was still somewhat surreal – until we were being asked, ‘What’s it going to take?’”

That is, what it would take for Puritan to ramp up production of its special- ized swabs from around 5 million per month to a number that kept being revised upward: 10 million, 20 million, 30 million, even 40 million a month. It became apparent to the young engineer that his company was being asked to do something that stretched the bounds of what was possible.

A few weeks later, the White House enacted the Defense Production Act to give Puritan federal funding so it could boost its capacity, and he was part of a 36-person conference call to figure out what the next steps would be.

“I remember thinking that there is no option here. We have to do everything we can,” McKenney, now Puritan’s director of engineering, said. “I can’t put words to that moment. Here we are, a small company in Maine, and to some extent, the health of the country, the citizens of the country, their well-being is dependent on us.” 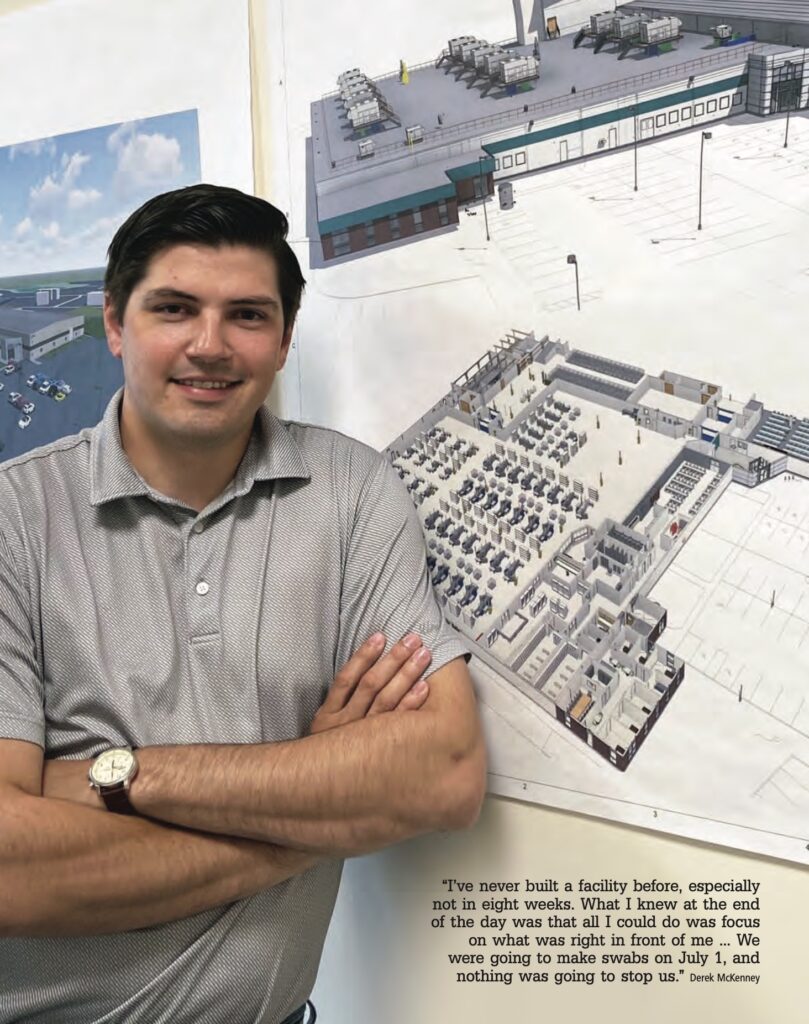 IT GALVANIZED the 2014 University of Maine engineering graduate, who found himself at the forefront of the company’s efforts to quickly scale up its capacity. At first, it was all hands on deck at the manufacturing facility in Guilford, with all employees working mandatory over- time and on weekends.

“I went from being 110 percent invested to working every minute of every day,” McKenney said. “We were going seven days a week, doing everything to produce more swabs.”

The company was able to increase its production to 40 million swabs a month, but more were needed. It became clear that Puritan needed to expand, and McKenney was selected to oversee the project. The company partnered with Maine-based construction firm Cianbro to convert an existing 80,000-square-foot manufacturing building in Pittsfield to a facility dedicated to the production of medical swabs. The trick was that they needed to do it in about two months.

“I’ve never built a facility before, especially not in eight weeks,” he said. “What I knew at the end of the day was that all I could do was focus on what was right in front of me … We were going to make swabs on July 1, and nothing was going to stop us.”

To get the job done, he drew on the problem-solving skills he honed as an undergraduate, as well as the strong work ethic that has served him well his whole life. Those things together meant that McKenney was the right person for this particular job, according to those who worked on the project with him.

“We were asked to do the impossible,” Richard Brescia ’95, an executive vice president at Cianbro, said. “And the impossible was to try to convert an existing facility, in eight or nine weeks, to produce swabs. ‘Can’t’ was not part of Derek’s vocabulary. And his ability to engineer, mastermind the equipment, answer the questions for the project team was just unbelievable. I haven’t seen anything like it.”

Though the plant conversion may well be the toughest challenge McKenney has had, it’s certainly not the first time in his life working hard helped him get the job done.

HE GREW UP in the rural Guilford area, where he enjoyed hunting, fishing, and making maple syrup. He was also the kind of kid who liked to know the “why” behind things.

McKenney’s mother worked at Puri- tan, and because of that he spent a lot of time at the company. By job shadowing there in high school, he began to get a sense of what engineering was and how it could help explain the whys and hows. McKenney, who became the first person in his family to earn a bachelor’s degree, was motivated to become an engineer. He saved money to pay for his education by doing odd jobs for people in the community, and also worked hard to get good grades and win scholarship funding.

Though he looked at a few schools, he liked the University of Maine’s focus. “UMaine was there to serve the state of Maine, and provide hard-working, talented engineers to the state,” he said. He was a good student and was accepted into the engineering honors society. He also had fun at school, though did return to Guilford on many weekends to keep up with his odd jobs business and, in the spring, to make maple syrup to sell. In the summers, he worked as an intern at Puritan, where he learned how formal regulations translate to the manufacturing process and other things.

It wasn’t easy, but he learned a lot, especially from the mistakes he made. Those taught him something important— that learning from failure is a critical part of succeeding. It was a lesson that resonated, and it was echoed in the most impactful class he had at UMaine. That was a design class with engineer- ing professor Michael “Mick” Peterson, which McKenney took his senior year. Peterson emphasized that identifying the problem that needs to be solved is almost more important than the solution itself.

“That’s something that I think is overlooked by a lot of professors,” McKenney said. “They leave out the real-world aspect of what comes with the degree, to some extent.” 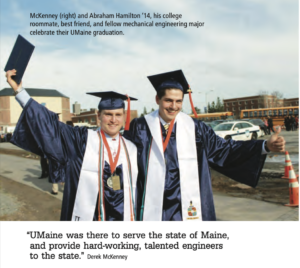 After graduation, he went to work for a $10 billion medical technology company in New Jersey, but after a couple of years he was ready for a change and a return to a more sustainable lifestyle.

Puritan wanted him back too, according to Timothy Templet, executive vice president of the family-owned company. “I was speaking to his mother one day and said, ‘Wouldn’t it be nice if Derek found his way back to Guilford?’ And we talked a little bit about what Derek likes to do,” he said. “He likes to fish, he likes to hunt, he likes to make maple syrup. When you’re living in New Jersey, traveling 70 percent of the time, you don’t get a lot of [time for] hunting or making maple syrup.”

MCKENNEY returned to Maine and Puritan in 2016, and when the relatively small company became an important piece in the nation’s fight against COVID-19, he was right there.

In June 2020, McKenney was among the speakers when President Donald Trump paid a visit to the Puritan facility in Guilford.

“It was an honor to have the President come to see the facility and the employees who had been working 80, 90, 100 hours a week,” he said.

After the successful build of the first facility, Puritan and McKenney moved on to build a second facility in Pittsfield, and he’s now working on building a third one in Tennessee.

He’s also trying to relax a little after the adrenaline rush that began in March 2020.

“It’s been an unbelievable two years. I think I’m still reeling,” McKenney said. He’s hoping that the future will allow him a little more downtime. He got engaged in March to Virginia Templet ’10, a Puritan co-worker, and they are planning a wedding.

“And really, this summer I do want to take some time to take in some fly-fishing trips, to go to a tropical island and hang out for a few days, not think about anything. And take a minute to catch my breath and truly reflect. It’s been a very involved two years,” he said. “That’s the hope, but you never know what tomorrow brings in this world. And I’m ready for the next challenge.”