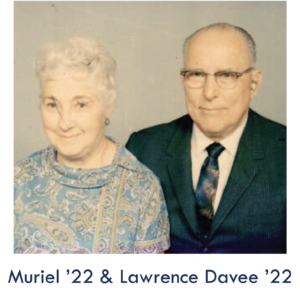 Four generations of the Davee family have forged paths in engineering and other fields, and become engaged members of the University of Maine community well beyond graduation.

The family’s connection began with Everett W. Davee, who taught mechanical engineering on campus for many years until his retirement in 1940. While Everett was not a University of Maine graduate, his son Lawrence ’22 and daughter Pauline ’39 earned degrees at the            university and married UMaine alumni.

Pauline and her husband, George Hitchings ’37, had two daughters, Marion ’65 and Diane ’75, who also attended UMaine.

Lawrence, who married Muriel Goodrich Davee ’22, worked at Fox Films, and later became president of Century Projection Corporation in New York City. Throughout his career he received numerous awards for technological advances in motion pictures. In 1976, 54 years after graduating from UMaine, his alma mater recognized him with an honorary doctorate.

Lawrence and Muriel’s sons, James ’50 and Robert ’59, continued the family’s Black Bear tradition. Both earned degrees in mechanical engineering and worked out of state, though Bob later returned to Maine and assumed ownership of Maine Coast Construction.

The fourth generation of graduates, the great-grandchildren of Lawrence and Muriel Davee, are Sarah Davee Sawyer ’09, married to Matt Sawyer ’10, and John N. Davee ’18. Adding to the total are future alumni, current students Jake ’19 and Molly Davee ’20. Sarah and Matt’s young daughter, Sophie, is expected to become part of the fifth generation of Davees to join the Black Bear family when she graduates from UMaine in 2040 or so.