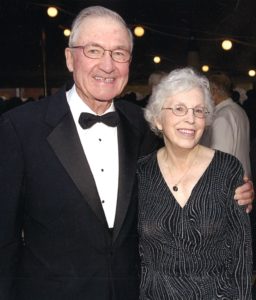 To many people in Maine, the family name Collins is synonymous with public service, community engagement, and education advocacy. Two family members in particular–Don ’49 and Pat ’49–have played a leading role in furthering the family’s extraordinary record on behalf of the people of Maine and in support of UMaine.

The Black Bear tradition began with Don’s father, Samuel W. Collins, who graduated in 1919 with a degree in agriculture. Decades later, as a successful business leader, he became chair of the University of Maine Board of Trustees. In 1964 the University awarded him an honorary doctorate, a distinction his granddaughter, U.S. Senator Susan M. Collins, would receive in 2011.

Sam’s four sons were graduated from UMaine and went on to prominent careers. Sam, Jr. ‘44, served five terms in the Maine State Senate, including several years as Republican Floor Leader. He later was appointed to the  Maine Supreme Judicial Court.

The graduation of Don and Pat’s daughter, Kathleen ‘70, introduced a third generation of Collins family alumni. Later the couple’s son Gregg ‘86 and his wife, Lori ‘86, would extend the Black Bear lineage with their children Emily ’13,  Annie ‘16, and Adam ‘18.

While having 13 UMaine degree holders in the family is certainly impressive, there’s one more distinction that no other family can claim: Three generations of Collinses–Sam Sr., Pat, and Don and Pat’s son, Sam–have chaired the university’s Board of Trustees.