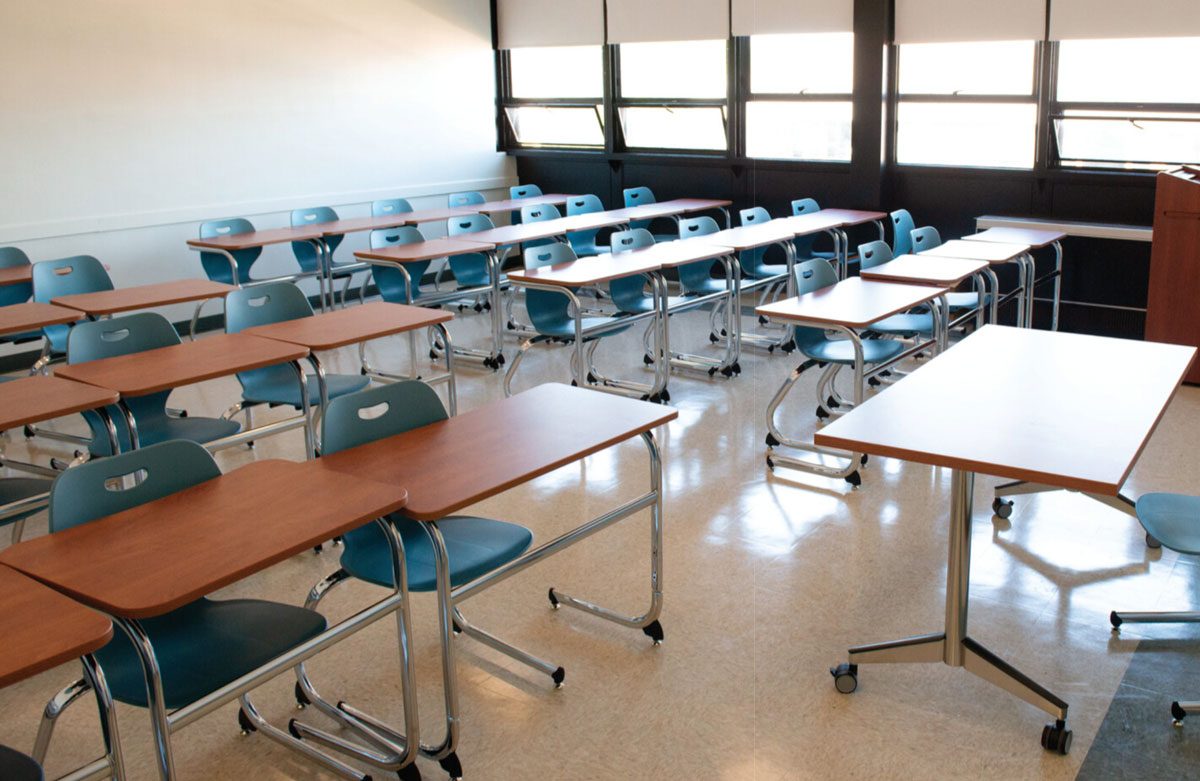 This isn’t how our senior year was meant to end. But we took our time to cry, and then in true UMaine fashion, we organized.

One classmate, Sophia Palangas, started a small Facebook event to gather her friends together for one last goodbye on Friday, March 13. The idea caught on fast, with more than 400 people saying they would attend.

The ceremony, which we collectively dubbed “Coronamencement,” only lasted about an hour, but it will mean so much to us forever. Huddled in the Memorial Union, we danced and cried and shared memories.

We wrote our names on index cards to be read off as we accepted improvised certificates that represented the diplomas we would eventually receive. We lined up, snaking through the entire first floor of the Union, some decked out in cardboard caps and bathrobes, and others in their best dresses and suits.

Ultimately, though, it’s not the ceremony that matters. It’s about celebrating our accomplishments and the community we’ve built, and by those standards, our homemade graduation was more than enough.

Excerpt from essay by Hailey Bryant originally published in the Bangor Daily News on March 13, 2020 and used with permission.

I walked to Aubert Hall, and all the students were lined up outside talking about how the Bangor Daily News released an article that said UMaine students would not be returning after spring break. Some people were excited, some were crying. I was panicking but trying to focus on chemistry. The entire lecture hall was buzzing when everyone was seated and our professor was trying to settle people down. She told us to just focus on chemistry. That was the worst exam of my life because all I could think of was the school shutting down.

At the time I was in the middle of the most important part of my research. We had just started our drought experiment at the beginning of the week and I needed the data to complete my capstone research. For something that I had been working on for so long, it was difficult to grasp that I might not be able to complete my plans. I went to class after work and there was a different sense of self in the room; people were gloomy and sad, shocked and concerned, and no one knew anything. No one expected it to be our last class, but it was and we just had to deal with it.

I was preparing to travel to Florida for spring break with the baseball team. Then next thing I know, I am packing up my apartment and driving home to Connecticut. I had multiple job opportunities lined up from a few different companies, however, once COVID-19 came about, all of the companies I was interviewing with had frozen their hiring processes and I was left waiting.

One of my classmates, a first-generation college student, came from very unfortunate circumstances. She completed her master’s degree during the spring semester. She broke out in tears because she had said that she really wanted to walk across that stage and wanted her family to be there, and to be able to have that moment, and felt like it had been taken away from her. She was still processing the fact that she’d been looking forward to that most of her life.

Living back at home was nice because I was able to see my family. Financially, it was very difficult because I was unemployed. My post-commencement plans were affected because the jobs I applied for postponed their hiring processes.

I took part in uploading my information and picture for UMaine’s Class of ’20 yearbook and watched some of the videos that were posted in place of Commencement. It was nice but bittersweet. To eventually have an in-person ceremony would mean the world to me. It would be fantastic to finally get that feeling of accomplishment and be able to see friends one last time at UMaine.

[Coronamencement] was a mixed bag of delight and somber reminiscence. I was happy to have one last hurrah with my peers but lamented the abruptness nonetheless. Looking back, I wouldn’t have wanted to close out the past few years any other way. It was such a uniquely organic way to send off everyone.

When you’re sitting in a classroom with 60–75 other students, you look around, and it’s easy to consider everyone as equal. You don’t really see the kind of aspects of their lives that you’re now getting to see as a result of the pandemic, where people are working two jobs sometimes, or they’re raising a child. This definitely made me more aware of what’s going on with others.

The strangest moment for me … was the “Coronamencement” ceremony organized by students. I was very impressed and greatly appreciated the effort they put into making us seniors feel valued by the UMaine community. Yet I felt terrible as everybody yelled “Congratulations.” My capstone was barely finished at the time and I had another couple waves of exams before I even reached finals week. Then in the blink of an eye, the ceremony ended and I found myself standing alone in the Union with nobody around to continue “celebrating” with.

The hardest part for me is that I feel like I’m stuck floating in between lives. For the past two years, UMaine was my home. Now I am staying with my boyfriend, but I don’t consider this my home either because I still feel like a visitor. I had to move out of my apartment and store all of my things in a car and now have nowhere to call my own. I am lucky to have a strong support system of friends and family members, but I no longer consider my parents’ house my home.

It’s been great to see people make the best of a terrible situation. People are taking the time to learn new things, develop existing hobbies, and those who are practicing social distancing are selflessly acknowledging and protecting those who cannot protect themselves. For the most part, we’ve seen the university, the state, and really the nation come together to work towards a common goal — something I haven’t ever witnessed in my life. For me, this break has given me time to spend time with family, improve at guitar, work on painting, and study for the MCAT.

I am a hardcore extrovert, so one of the hardest things I had to adjust to was to not be around people, hug my friends, and smile with them about silly jokes. My family also went on a complete lockdown back home in Ethiopia. I was planning to visit them in August before I start grad school in the fall, which is now just a dream that won’t come true.

I always told my friends that I came from the other side of the Earth [Iran] in order to become a good scientist. I sacrificed a lot of fun moments of my life to be a well-educated person and help my community in the future. I even delayed my marriage ceremony to celebrate it with my UMaine graduation. I have learned life is really short and I have to spend more time with people who are supporting me. Moments won’t come back to us.

When I first committed to the nursing program at UMaine, I was aware of the nursing shortage across the country. However, I never imagined that I would be beginning my career in the midst of a pandemic.

I was looking forward to so much [during my final semester]: the final push toward graduation, 192 hours of senior partnership, the University Singers spring tour in March, a trip to Italy in late May, the school’s nursing pinning ceremony, and commencement. Finally the start of my career at St Joseph Hospital, where I had already accepted a nursing position on their cardiopulmonary care unit.

[We had] a virtual pinning ceremony that was streamed live on Facebook. There were congratulations and encouragement from Dr. Ferrini-Mundy, our nursing director Kelley Strout, and Governor Mills. The School of Nursing did a phenomenal job of making this event as memorable as possible.

I almost like the fact that this virus has sort of put us all together on the same page. I joked and said I almost feel like it’s neat that I’m doing the same thing as this celebrity is doing – like Taylor Swift – we’re doing the same thing: staying home and washing our hands, and I have just never seen anything like this before on a global level. It takes away the lines we have created that we call “countries.” We’re not this country and that country, we’re all humans. I just think this virus puts into perspective how vulnerable we are on this Earth, how maybe we should think about respect more and what it means.

Losing the security of full-time employment upon graduation was by far the hardest part of reality. While it was a shock, it did allow me to reconsider my career path, and think of alternative ways to reach my goals.

It was just such an odd sight to see on a weekday in March. People moving in and moving out the first week of school and the last week of school? That’s completely normal. But I was so shocked watching them [leave mid-semester]. I felt bad because their whole life just completely changed in 24 hours. For me, that was the indicator that there was a high sense of urgency.

We were heartbroken that we had overcome so many obstacles, and that [cancelation of the season prior to the championship game] was how it was going to end This trip became the last trip with our teammates, and we made sure to enjoy every moment a little extra. Of course, we expected to have the rest of the semester to spend with each other, but due to the increase in severity of COVID-19, many teammates returned home on short notice. Seniors had their last few months with their teammates taken away, but luckily, I’ve still been able to ZOOM chat with mine.

I’m grateful for the amazing fans, people, and donors that are like no other in the country. Truly the most exciting atmosphere to play in. I’m most grateful for the teammates that I’ve had, and those I continue to stay in touch with. They are my pick-me-up on the days I’ve needed it, the push in the back to be better, and the reason I’m laughing 24/7.

On March 15th my brother and I purchased a flight back to Valencia for as soon as we could, the next day. On March 16th we took the bus from Bangor to Boston’s Logan Airport, and when we arrived at the airline counter, we were told that our connecting flight from Lisbon to Valencia was canceled due to COVID-19. As it turned out, all flights arriving in Spain were canceled after 11:00 PM that day. We both have a mutual friend, a UMaine alumnus, who offered both of us a place to stay in Colorado and we decided to go to a different airline and take the first flight we could find to Colorado, where we were able to stay until we can return to our families in Spain.

All three of my graduate-level classes made the transition to remote coursework without difficulty. While it was not the same as in-person classes, my professors did their best to make the remote work as instructive and clear as possible.

The School of Policy and International Affairs allows for students to participate in an internship in place of a thesis, which I was lucky enough to complete before the pandemic began. However, several of my classmates had their internships canceled due to the pandemic, and then needed to discuss alternatives with the program directors.