Longtime Dean of College of Engineering to Retire 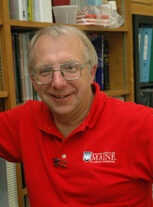 Dean of the College of Engineering Dana Humphrey is retiring later this summer. Dean Humphrey arrived at the University of Maine in 1986.

He taught civil engineering courses, served as chair of the department of civil and environmental engineering from 2000-2006, and since 2007 has served as dean of the College of Engineering.

“Dean Humphrey has had an extraordinary influence on UMaine academic strengths and reputation,” said Alumni Association President/CEO John N. Diamond `77, `89. “He has worked closely with faculty members across UMaine and the state university system as well as with the private sector and state policymakers to address Maine’s need for talent and innovation. He is beloved by students and alumni, as do his faculty colleagues and fellow UMaine administrators. He will long be remembered as one of the university’s most impactful leaders.”

In August, the Ferland Engineering Education and Design Center, which Humphrey spearheaded, will be dedicated. The state-of-the-art facility will open in time for students who arrive in the fall.