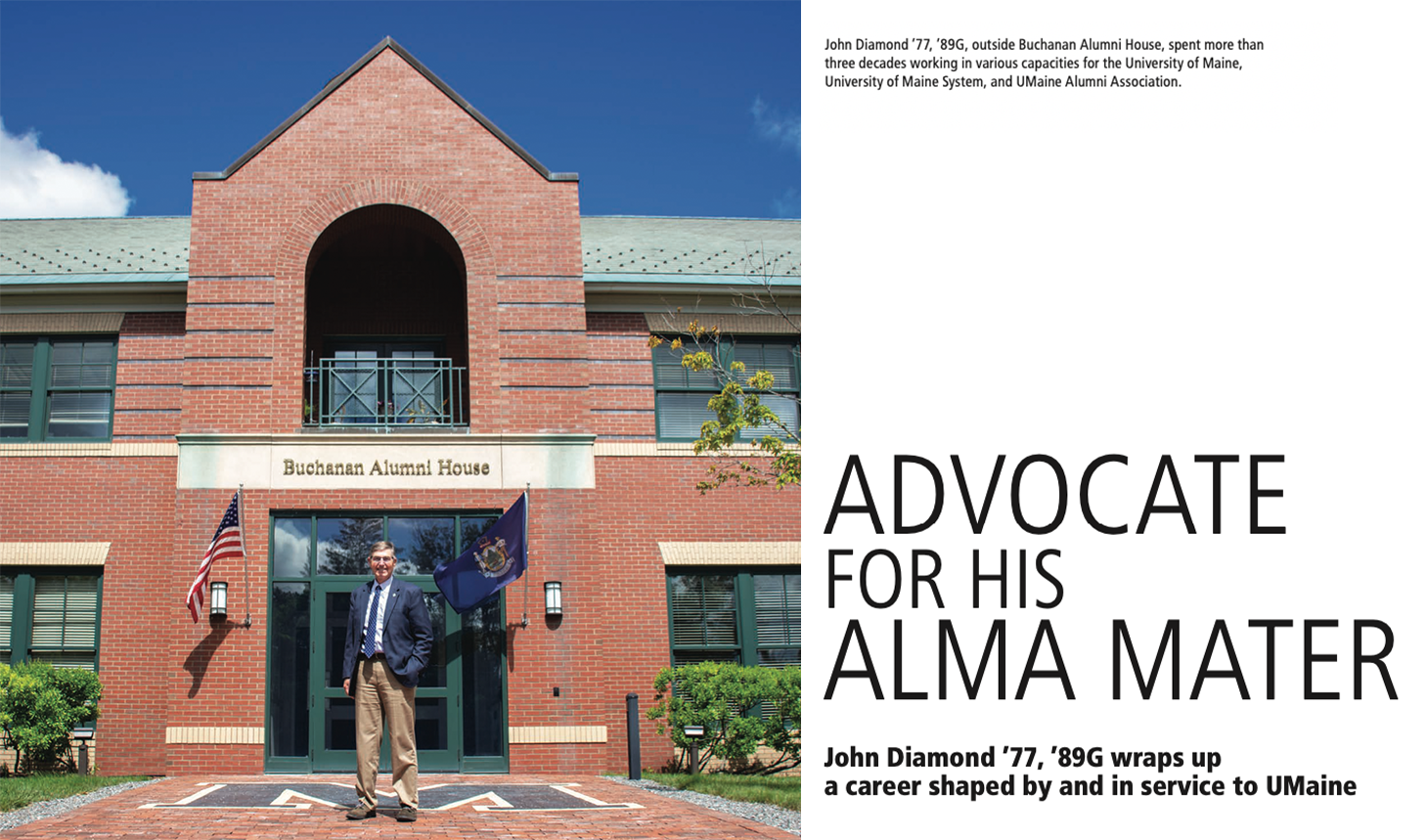 Advocate for His Alma Mater

ON JUNE 30, John Diamond ’77, ’89G retired as president and CEO of the self-governing, 110,000-member UMaine Alumni Association. It was the last stop in a professional career that included roles as a journalist, state legislator, professor, university administrator, and author.

“It’s been the most personally enjoyable job I ever had,” he says. “I got to spend time with alumni, students, and UMaine friends who love the university as much as I do. I also got to work with terrific board members and some of the nicest and most committed colleagues I’ve ever known.”

Diamond’s selection in 2015 as the Alumni Association’s chief executive was a homecoming for the Bangor native. Shortly after longtime Association President Todd Saucier `93,`97G announced his plans to step down in 2015, Diamond emerged as an attractive successor. He and his wife Marcia`02G had just moved back to Maine after living and working out-of-state. Diamond had deep UMaine connections, including three years as a faculty member in the journalism department and a total of 18 years as a senior administrator for UMaine and the University of Maine System. 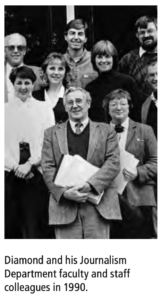 “John’s decades of experience and national perspective was just what the Alumni Association needed,” says Dr. Jeff Mills `82, president and CEO of the University of Maine Foundation. “The things he’s done as president boosted the Association’s relevance to the university’s reputation and success.”

As examples, Mills cites Diamond’s expanded emphasis on strategic communications and advocacy, particularly the use of MAINE Alumni Magazine, the Association’s Bear Tracks e-newsletter, and webinars; and expanded engagement with alumni, donors, academic units, and faculty. Mills also praised Diamond for commissioning the first-ever study of Black Bear alumni and their influence on Maine’s economy and tax base. (See www.umainealumni.com/impact/)

“John has been a stalwart advocate for his alma mater for more than three decades, especially in the last seven years as president and CEO of the Alumni Association,” says University of Maine President Joan Ferrini-Mundy. “As an alumnus, faculty member, and community leader, he knows firsthand — and he champions — the UMaine student experience and the differ- ence the state’s research university makes in Maine and beyond.”

“John’s passion and commitment to UMaine have made all the difference in the Association’s ability to further its mission of encouraging relationships and mobilizing resources in ways that enhance the value of a UMaine degree,” adds Julia Munsey `02, chair of the Alumni Association’s board of directors.

Diamond began his UMaine affiliation in the fall of 1973. As an undergraduate, he worked at the student-run campus radio station and campus newspaper, joined Delta Tau Delta fraternity, and played intramural sports. The aspiring journalist also had a part-time job as a reporter for Maine Public Radio, which was then headquartered in UMaine’s Alumni Hall.

Following his graduation in 1977, Diamond worked as a newspaper reporter but stepped away from that job in 1978 to manage a friend’s Congressional campaign. Two years later he sought political office himself, winning election to the Maine House of Representatives. In 1984 his colleagues elected him House Majority Leader, at the time making the 30-year-old the youngest legislator in the U.S. to hold that title.

“John actively recruited UMaine graduates for his own legislative staff and for other State House positions,” the Foundation’s Mills remembers. Diamond also recruited UMaine alumni to run for the legislature, including Mills himself in 1983. Diamond had first met Mills when the latter was UMaine’s student government president. Mills went on to serve a decade in the Maine Legislature.

As a legislator Diamond also kept a protective eye out for UMaine. In 1982 he worked with a group of alumni who believed the state university system’s trustees underfunded and underappreciated the Orono campus’s statewide mission. In response, Diamond introduced a bill to establish a UMaine “board of visitors” to advocate for UMaine with trustees and the public. Though the bill failed to pass, the Legislature eventually approved the idea. Today UMaine’s board of visitors plays an active role in promoting the university’s agenda and needs.

In 1986 Diamond was instrumental in passing a special commission’s recommendations to dramatically increase state funding and make structural changes involving Maine’s university system. A minor but symbolically significant element in that legislation restored “University of Maine” as the flagship institution’s official name following a 15-year period as the “University of Maine at Orono.” 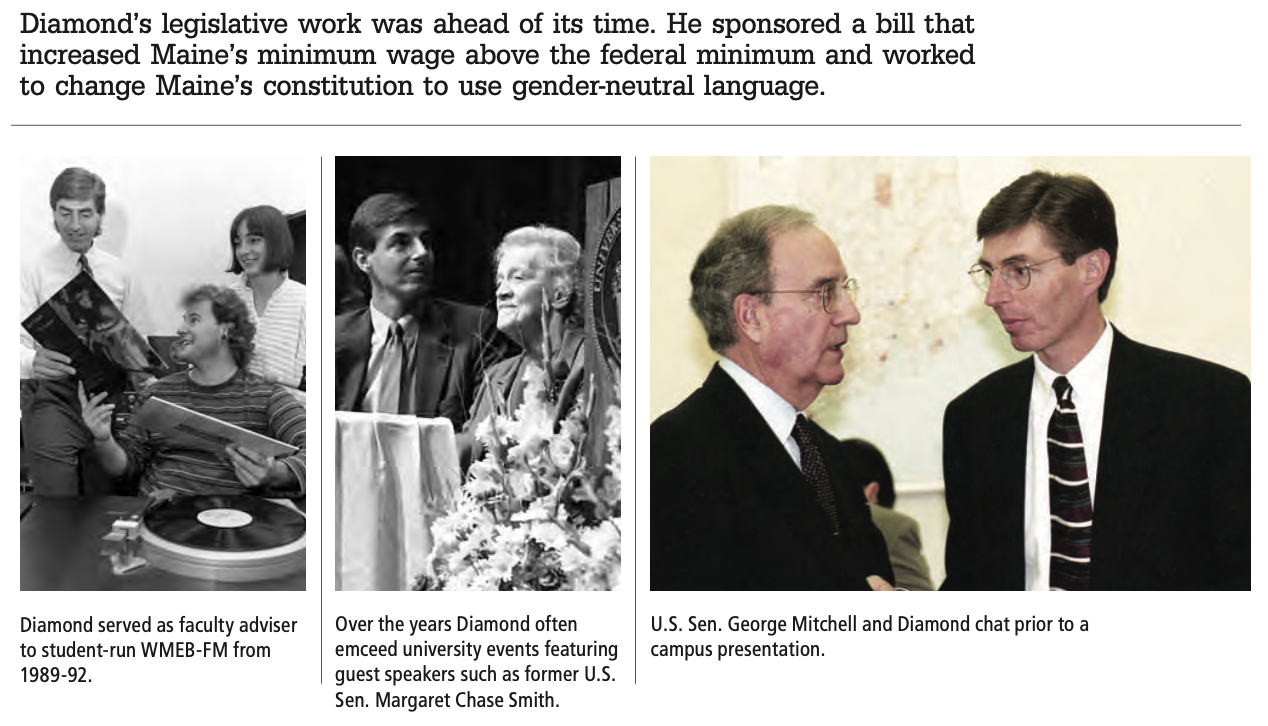 Around the same time, Diamond married Marcia LaRochelle `02G, the deputy press secretary to U.S. Sen. George Mitchell. The couple had privately decided they would leave politics in 1988 to start a family and pursue careers in education. She became a middle school teacher and in 1989 he accepted a full-time teaching position in UMaine’s journalism department.

Diamond accepted and stayed in that role for ten years. He says one of his proudest accomplishments was the creation of UMaine Today, an outreach magazine focused on showcasing UMaine research and public service. UMaine Today is now in its 21st year of publication.

In 2002 Diamond became executive director of external affairs for the University of Maine System (UMS). He worked closely with the system chancellor and the presidents of Maine’s seven public universities as well as with campus and external advocates to promote higher ed policies and funding.

Many in Maine were surprised when in 2010 Diamond accepted a senior position at the University of Arkansas. The Diamonds had become empty-nesters, and John was interested in working at a larger institution, one with more resources to work with. As passionate sports fans, they also liked the idea of being at a school with a big-time college athletics program.

The Diamonds spent nearly four years in Arkansas and one in Wisconsin. Homesick for Maine, they returned shortly before John took his “dream job” with the Alumni Association.

Like Mills, Diamond speaks of the Alumni Association’s “relevance” to UMaine’s overall success.

“The Alumni Association is second only to Maine’s taxpayers in terms of its contributions to the university’s
reputation, relationships, and resources,” he explains. “If we do our job well, our members will develop and maintain a close affinity with the university. Alumni and friends will choose to financially support scholarships, faculty, and programs. High school students in the state and elsewhere will want to earn a UMaine education. And taxpayers, policymakers, and others will support and invest in public higher education.”

Entering retirement, Diamond says he and his wife — who is now in her 19th year as an elementary school principal — remain firmly committed to UMaine. They have established the John and Marcia LaRochelle Diamond Scholarship Fund through the UMaine Foundation to provide need-based financial aid to first-year students.

“I feel that finishing my professional career at the University of Maine is natural,” Diamond says. “It’s where it all
started. Everything fell into place nicely. And I’m grateful that it did.”