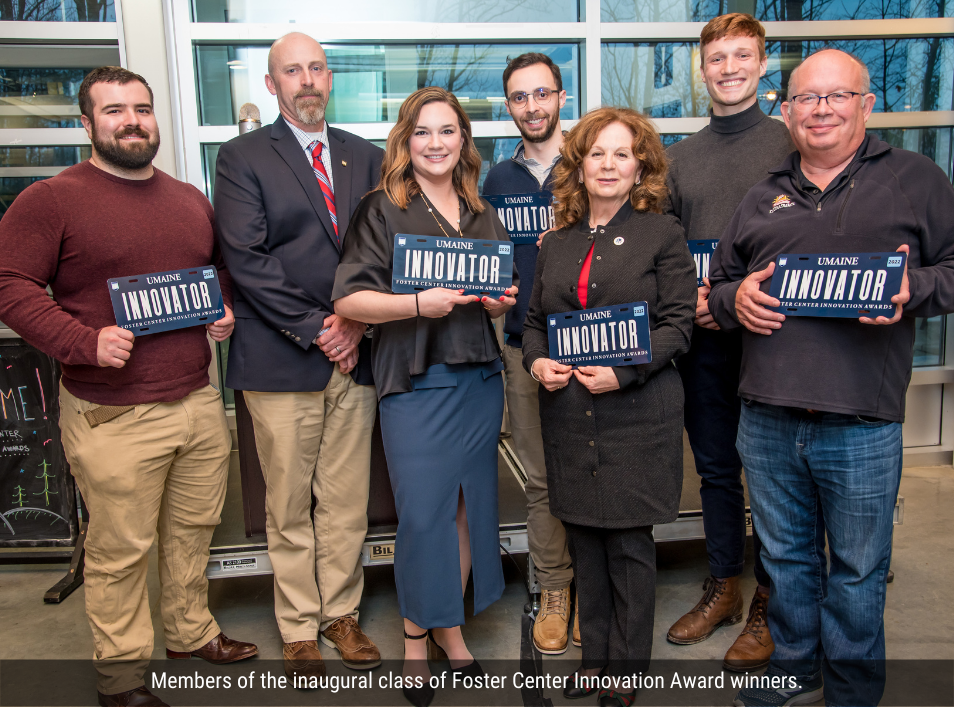 Celebrating the Innovators of UMaine

Black Bear alumni, faculty, staff, and students are among Maine’s most productive innovators and entrepreneurs. In this month’s column, we recognize the inaugural class of Foster Center Innovation Award winners, who were honored at a ceremony on April 14 as part of Maine Impact Week. The Innovation Awards were developed to recognize and celebrate the students, faculty, staff, and alumni who are putting into action entrepreneurial or social impact solutions in Maine and beyond. The first group of winners includes individuals working in aquaculture, biomedicine, medical technology, and the study of innovation.

“This year’s winners are a cross-section that beautifully illustrates UMaine’s research innovation across disciplines,” said Renee Kelly, assistant vice president of innovation and economic development. “We are so excited to recognize their accomplishments in commercialization and the work that they have done to realize their ideas, as well as to showcase the expanding culture of innovation on our campus.”

In the Alumni award categories, Justin Hafner ‘18 and David Holomakoff ‘14, ‘17G, the co-founders of Portland-based digital movement analysis startup KinoTek, received the Rising Star Award in recognition of the Portland company’s growing profile and the founders’ efforts to inspire and encourage other young entrepreneurs. Doug Hall ‘81 received the award that will bear his name in future years, which honors an alumnus who is recognized for innovation-driven social, cultural or economic impact in Maine and beyond. Hall is the founder of Eureka! Ranch and co-inventor of the Innovation Engineering curriculum that is the foundation of many Foster Center programs and has been adopted by educational institutions around the U.S. and the world.

Foster Center-incubated student startup Ferda Farms took home the Standout Startup Award in recognition of the team’s efforts to scale up production and diversify the crop at their oyster farm on the New Meadows River in Brunswick. The founders are mechanical engineering major and 2022 salutatorian Max Burtis and Sam Dorval ’21. Kendra Batchelder ‘11, ‘13G, a UMaine Ph.D. candidate in computational biomedicine, received the Impressive Innovator Award for her work with professor of biomedical engineering Andre Khalil to commercialize technology to aid in the early detection of breast cancer.

Professor of clinical nutrition Dorothy Klimis-Zacas received the Foster Innovation Award for her ongoing work to develop wound-healing treatments from Maine wild blueberries, which leverages decades of research into one of Maine’s signature crops. Finally, Team Xylogen, led by professor of biomedical engineering Michael Mason, received the MIRTA Spirit Award in recognition of their efforts to advance commercialization of a nanocellulose composite material suitable for a range of biomedical uses. Since completing UMaine’s MIRTA accelerator program in 2019, the team has partnered with BESPA GLOBAL, a consortium of doctors experienced in commercializing technology, to create Xylogen Medical to bring this technology to market. The company has secured its first medical device company partnership, established a research, development and commercialization timeline, and is generating prototypes for customer and market evaluation.

NOTE: The “Innovators of UMaine” series is supported by a grant to the Alumni Association from the Maine Technology Institute, also a sponsor of the Foster Center Innovation Awards.