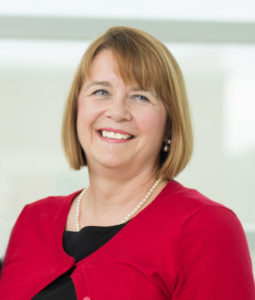 Donna Keirstead Thornton has been a loyal ambassador for the University of Maine and its alumni through her work and community involvement in her home state of Maine and in New Jersey, where she currently lives.

Growing up in Presque Isle on an Aroostook County potato farm, Thornton arrived in Orono in 1974 to begin her college career. She became active on campus, joining Alpha Phi sorority and serving as a resident assistant. After finishing her bachelor’s degree in 1978, she immediately pursued a graduate degree, earning a master’s in public administration in 1979.

Her early career was spent in administrator roles in the healthcare and real estate management fields. In 1999 Thornton made a career move that would, over time, lead to prominence as a successful higher education advancement leader: She joined the UMaine Alumni Association as director of the annual fund. In that role she developed a new annual fund plan, which increased fundraising and outreach, and carried the organization forward for many years. Her success as an administrator and planner led to her promotion as the Alumni Association’s director of alumni operations. After a year as the association’s interim president and CEO, in 2006 Thornton accepted a senior alumni relations position at Rutgers University in New Jersey. Today she serves as Rutgers’ vice president for alumni engagement, annual giving, and advancement communications.

Throughout her career, Thornton has shown herself to be a respected and effective leader. She served nine years on the Brewer City Council, including three years as the City’s mayor. She also held key volunteer positions as a member of impactful and influential not-for-profits, serving as vice president of United Way of Eastern Maine and treasurer of the Maine Development Foundation.

Although now spotted wearing scarlet in honor of Rutgers and its alumni, Thornton still bleeds blue. A longtime and generous donor, she recently established the Maine National Education for Women Leadership Fund at the University of Maine Foundation.