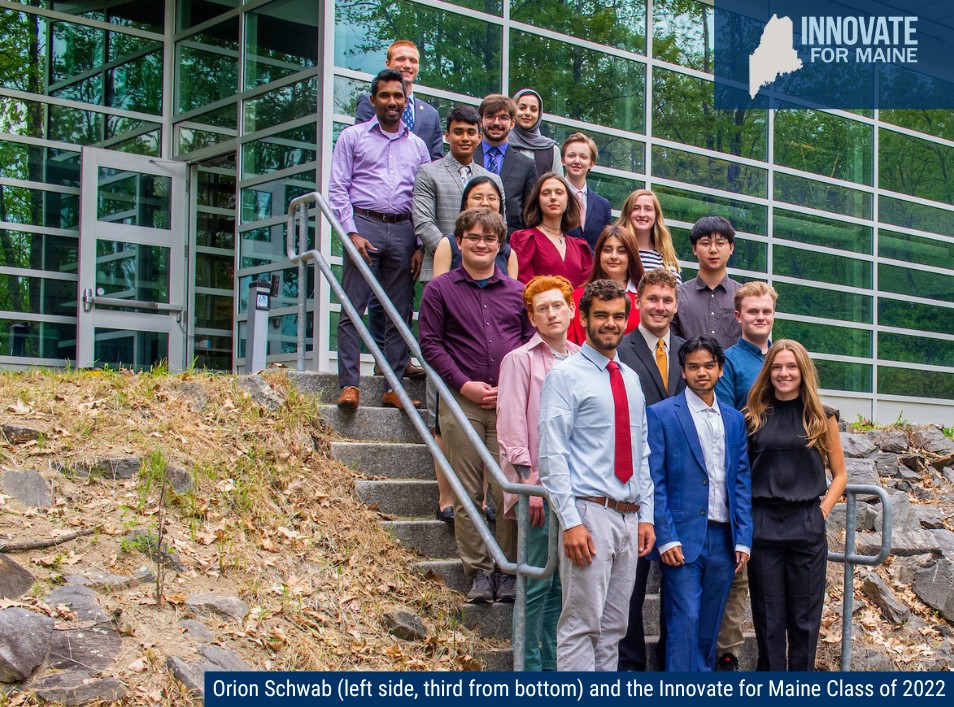 Black Bear alumni, faculty, staff, and students are among Maine’s most productive innovators and entrepreneurs. In this month’s column, we hear from Orion Schwab, a rising senior and computer science major at UMaine who spent the summer as a fellow in the Innovate for Maine program run by the Foster Center for Innovation. Innovate for Maine has a straightforward mission: to help Maine companies thrive through innovation and to open students’ eyes to rewarding career opportunities in the state of Maine. Students complete an innovation boot camp at the Foster Center to bond as a group before spreading out across the state to complete their internships. Schwab, of Livermore Falls, worked for Blue Marble Geographics, a GIS and geodetic software development company based in Hallowell. Here, he reflects on his summer experience and plans for the future.

Orion Schwab: “The innovation training we got during boot camp was useful for developing strategies for coming up with meaningful ideas. In high school and middle school, I was really lucky to have exposure to innovation, to be encouraged to come up with new and unique solutions, and to have experiences that really helped me to understand what that word means. A lot of times, when people are trying to think of a new solution to a problem, they get stuck in old ways of thinking. It’s hard to imagine things that have never been done before! The exercises we did at boot camp helped you break through that and also taught you a lot of really cool ways of getting people to share ideas. For me, it was also useful in helping to bring me out of my shell after two very long years of the pandemic.

“We were incredibly lucky to have such a diverse group of people in this particular cohort of Innovate for Maine – literally people from all over the world. It’s so cool to now have a friend from Iran, and a friend from China, and a friend from Nepal. It was really nice not just to socialize with them, but to have their perspectives in these exercises and group discussions. It was one of my favorite things about the program.

“I’ve always been interested in developing user interfaces, and developing a complete application. I’ve toyed with the idea of getting more involved in independent gaming. After graduation, I’ll probably look to get a software development job, but eventually I think I’ll also pursue a master’s degree in a non-STEM field because I’ve always walked a tightrope between my interest in STEM and my interest in politics and social sciences. This was a great summer job, and it was so nice to apply the things I’ve learned in a meaningful way. I used to say that I’d never programmed anything useful, and I can no longer say that after this internship.”