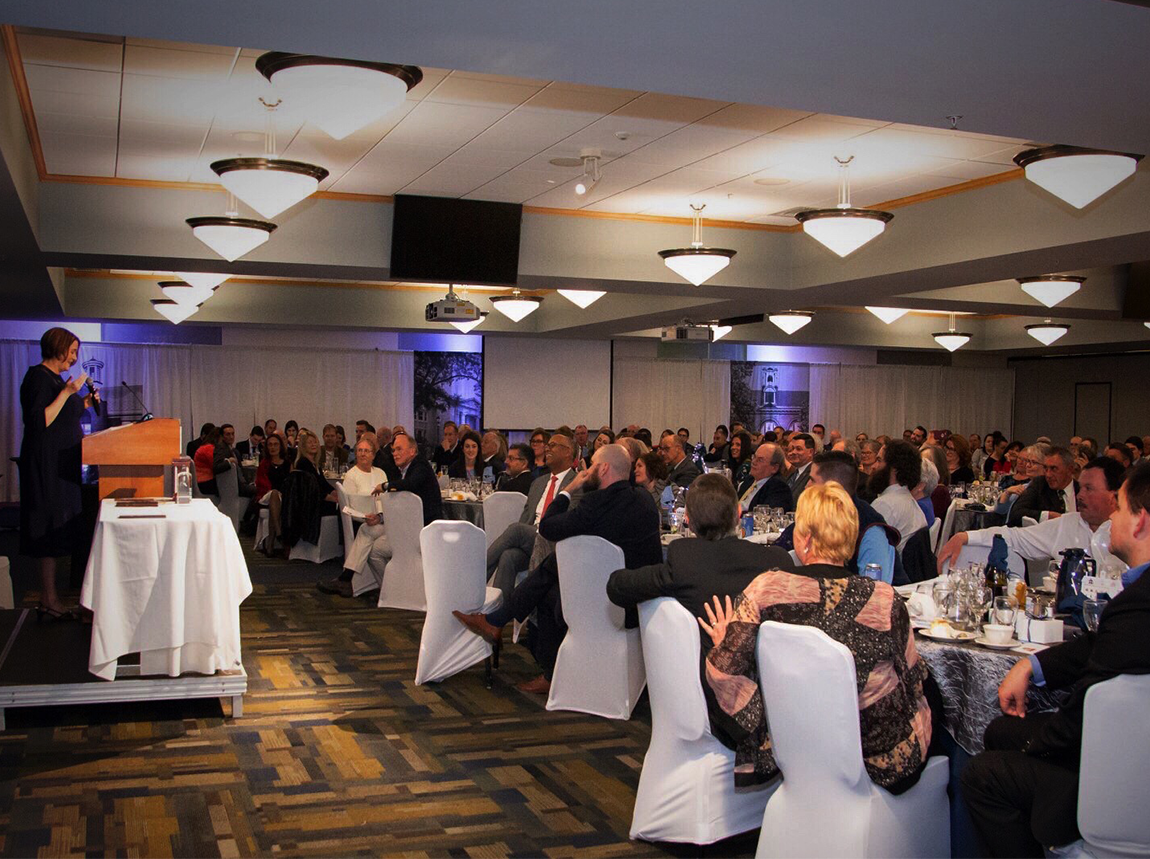 A Night of Celebrating Alumni Achievement

The Alumni Achievement Awards Celebration, which took place on Friday, April 5th at Wells Conference Center, recognized outstanding alumni for their career achievements, legacies, and impact on the university, local communities, and beyond.

Dr. Sandra Caron ‘79, ‘82G was awarded the Distinguished Maine Professor Award, the university’s highest teaching award. A professor of family relations and human sexuality and member of Women’s, Gender, and Sexuality Studies, Caron usually teaches 1,000 students in her classes each year, and her class evaluations are among the highest in the College of Education and Human Development. She has written several books, nearly 50 scholarly publications, surveyed UMaine students about their sexual behaviors and attitudes for over 30 years, and for two decades wrote a weekly Q&A column in The Maine Campus titled “Sex Matters.” Caron’s award was co-sponsored by the College of Education and Human Development and the Associated Faculties of the University of Maine.

Chuck Peddle ‘59 received the Alumni Career Award, the association’s highest honor, generously sponsored by the University of Maine Class of 1959. A Bangor native now living in Santa Cruz, California, Peddle is a prominent figure in computing technology. In 1976 he led the design of the groundbreaking 6502 microprocessor, which helped make personal computers, arcade video games, and other technology both possible and affordable to consumers. Because of his many successes and influence on technological advances, he is frequently referred to as “father of the personal computer” within and outside of Silicon Valley.

Dr. Bruce J. Leavitt ‘77 was awarded the Bernard Lown ‘42 Humanitarian Award, sponsored by Dirigo Pines. Leavitt, division chief of cardiac and thoracic surgery at the Larner College of Medicine at the University of Vermont, has traveled to Rwanda, Nigeria, Sri Lanka, Panama, Russia, and China to perform heart surgeries as part of Team Heart Cardiac Surgery Mission, Doctors Without Borders, and other humanitarian aid organizations.

Abtin Mehdizadegan ‘10 received the Spirit of Maine Achievement Award from Boulos Asset Management. The award recognizes a young alumnus or alumna who has achieved exceptional professional success in the years since graduation. A Presque Isle native, Mehdizadegan is an employment attorney with Cross, Gunter, Witherspoon & Galchus, a prominent law firm based in Little Rock, Arkansas. He has been recognized numerous times in his short career, including as a Top Attorney of 2017 (Arkansas Life magazine), Rising Star in Employment Law (HR Professionals magazine), and one of the 20 in Their 20s (Arkansas Business magazine).

In addition to Peddle, Leavitt, Thornton, and Mehdizadegan, several others were honored. Those honorees are:

Miles Theeman of Bangor, recipient of the Champion of UMaine Award, which recognizes a non-alumnus or -alumna who has been an effective, longtime advocate for UMaine’s mission and public agenda. The award was sponsored by Northern Light Health.

Paige Eggleston ‘13 of Portland and Nate Wildes ‘12 of Bath, co-recipients of the Rising Star Award. The award honors recent graduates who have demonstrated outstanding commitment to advancing the strength and success of the Alumni Association and its members. This year’s Rising Star Awards were sponsored by S.W. Collins and WBRC Architects Engineers.

The Davee family received the Fogler Legacy Award, sponsored by Hammond Lumber Company. The award is given to a family with multiple generations of Black Bear alumni. Ten members of the Davee family have earned UMaine degrees, with another member currently pursuing an engineering degree.

The full slate of videos, including the introduction video from the event, is available here.