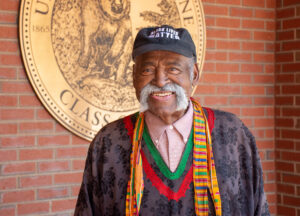 His long career included work in education, anti-poverty programs, and community planning. As a young man, he attended the March on Washington, where he heard Dr. Martin Luther King, Jr. speak. He became involved in civil rights work, pushing the barriers of racism.

After returning to Maine from his native New Jersey, he taught and worked at his alma mater as a minority recruiter in the Admissions office. He founded and served as president of the Maine Human Rights Coalition, and was instrumental in bringing the region’s annual Martin Luther King, Jr. Day celebration to the UMaine campus.